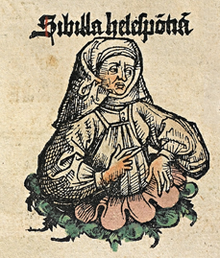 The Hellespontic sibyl is one of the ten sibyls that are provided with a geographical epithet . These additional names are based on Laktanz on Varro , a Roman writer of the 1st century BC. Chr., Traced back.

According to ancient legend, the place of the oracle of a Hellespontic Sibyl was on the Hellespont on the coast of Asia Minor. Among other things, the town of Marpessos claimed to have one of the oldest sibyl sanctuaries ( Temenos ). However, there is hardly any direct reference to a sibyl especially at this location in preserved sources from Greek and Roman antiquity .

Based on lactance, the Christian Middle Ages and the Renaissance understood the Hellespontic sibyl as a pagan herald of an expectation of God, almost on a par with the prophets . At that time two more from Asia Minor were listed among the sibyls , the Sami Sibyl and the Sibyl of Erythrai . Because of their geographical proximity, the three sibyls who, according to legend, prophesy in this region are often exchanged or equated with one another.

A separate Hellespontic sibyl is usually represented in Gothic and Renaissance art based on the Varro listing as one in a series of sibyls, often in contrast to an often equal number of prophets from the Old Testament. In the probably best-known pictorial representation of five Sibyls by Michelangelo in the fresco on the ceiling of the Sistine Chapel , however, no 'Hellespontica' is contained, it is an 'Erithrea'.

In numerous other groups of sibyls, however, there is now and then a 'Hellespontica' identified by name, e.g. B. in the following locations:

Commons : Sibyl of the Hellespont  - collection of images, videos and audio files