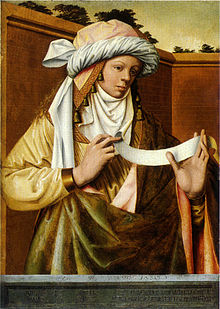 The Sami sibyl is one of the ten sibyls differentiated from Laktanz according to the Roman historian Varro , each with a geographical epithet .

According to ancient legend, the place of the oracle of the Sami Sibyl was the island of Samos off the coast of Asia Minor. With the exception of Tacitus previously, there is hardly any direct reference to a Sibyl especially on this island in other preserved sources from Greek and Roman antiquity .

Based on lactance , the Christian Middle Ages and the Renaissance understood the Sami Sibyl as a pagan herald of an expectation of God, almost on a par with the prophets .

In Gothic and Renaissance art , the Sami sibyl is usually depicted as one in a series of sibyls , based on the Varro listing , often in comparison to an often equal number of prophets from the Old Testament. In the most famous pictorial representation of five Sibyls by Michelangelo in the fresco on the ceiling of the Sistine Chapel , however, no 'Samia' is included.

In numerous other groups of sibyls , however, there is now and then a named 'Samia', e.g. B. in the following locations:

In Schedel's medieval world chronicle , a colored picture of a 'Sibilla samia' is printed as one of twelve sibyls .