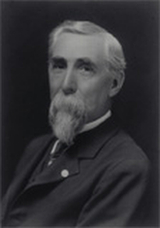 Henry Martyn Leland (born February 16, 1843 in Barton , Vermont , † March 26, 1932 in Detroit ) was an American automobile entrepreneur and founder of the Cadillac and Lincoln companies .

Leland learned precision engineering and manufacturing in the firearms industry, where very tight tolerances were required. He applied this knowledge in the growing engine industry and became head of the Leland & Faulconer engineering factory as early as 1870 . This was an engine supplier to Oldsmobile . Leland also invented the electric barber's scissors, and for a short time produced a one-of-a-kind toy train, the Leland-Detroit monorail .

In 1902, Leland was hired by William Murphy and his partners at the Henry Ford Company as a consultant and then used to troubleshoot manufacturing problems. Conflicts arose quickly when he gave instructions to Henry Ford . Ford saw its responsibility, but the partners sided with Leland and Ford left the company. Ford received $ 900 in severance pay and was allowed to take away plans for a new automobile he had designed. This resulted in the Ford Model A with a two-cylinder engine . The partners kept the prototype . They replaced the engine with a single cylinder engine of Leland & Faulconer , the Henry Leland had also designed for Oldsmobile. The company name (company) was immediately Cadillac changed, and this car was, subsequently, the first Cadillac as Model A designated.

At Cadillac, Leland introduced many modern manufacturing processes, including the use of standardized and interchangeable parts that could be supplied by independent machine builders. This further development of a basic rule by Eli Whitney allowed independent workshops and car owners to repair cars.

Leland sold Cadillac to General Motors (GM) on July 29, 1909 for $ 5.6 million, but remained on the company's board of directors until 1917. He left the Cadillac in the debate on the armor participation because William Durant switch, the president of GM, was not ready production at Cadillac to war production, and founded, 74 years old, the Lincoln Motor Company to Liberty - aircraft engines for the US and later to establish their allies . In just 10 months, he built a plant that employed 6,000 people. 17,000 engines were produced. After the war, production was switched to luxury automobiles. The required share capital increase of US $ 6.5 million came about within three hours.

In 1922, Lincoln went bankrupt and was bought by the Ford Motor Company. Ford's $ 8 million offer was the only one. Ford initially offered $ 5 million, but the judge was conservatively expecting the well-equipped company to be worth $ 16 million. After the sale, the company was continued by Henry Leland and his son Wilfred, assuming they still had full control. Ford sent some employees to Lincoln for training. It soon became clear, however, that by downsizing production, they would stop the losses that had led to bankruptcy . The relationship between Henry Ford and the Lelands deteriorated. On June 10, 1922, Ford's director Liebold came to Lincoln to obtain the resignation of Wilfred Leland. When it became clear that Liebold had Henry Ford's power of attorney, Henry Leland gave up.

Henry Leland died after a short illness at the Grace Hospital in Detroit. He was buried in Woodmere Cemetery in Detroit.

Cadillac won the Dewar Trophy in 1908 and 1913. The brand received this important British innovation award first for Leland's introduction of the interchangeable components and then for the first standard starter in an automobile that Charles Kettering had developed at his suggestion.

Henry M. Leland was President of the Society of Automobile Engineers in 1914 , an honorary post that was awarded annually.

He was inducted into the Automotive Hall of Fame in 1973, the highest honor the automotive industry can bestow. The rationale stated that "Henry Leland brought style, elegance and a reputation for quality to the American automotive industry."