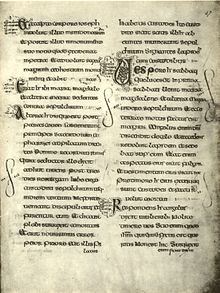 Insular circular in a manuscript of the Gospel of Matthew , second half of the 8th century. Rome, Biblioteca Apostolica Vaticana , Barb. Lat. 570, fol. 47r

The Irish script , the other Celtic scripts and the Anglo-Saxon script are called insular scripts . These scripts were formed in the early Middle Ages under the slight influence of the Ogham script on the basis of the semi- uncials and, to a lesser extent, the uncials . They were first used in Ireland, later also in Scotland and England.

The half-uncial was the font of most codices that of the missionaries who Christianized Ireland in the 5th century, were brought. Hence their influence dominated. The starting point for the emergence of the insular scripts was not business correspondence written in italics, but precious manuscripts written in semi-social script. The beginning of the Irish writing probably falls in the second half of the 6th century. The Anglo-Saxons became familiar with this script through the Irish mission in Northumbria from 634 and through the many Anglo-Saxons staying in Ireland for many years. This is how Irish-Northumbrian calligraphy and book art developed.

A main feature of all insular scripts are the spatula-shaped shaft approaches . This is an ornamental shape that shows itself in the triangular ends of the ascenders and is repeated in the shaft attachments of i, u, f, p, r, the first shafts of m and n and the shafts of N and R.

The oldest form of the insular script is a semi-uncial, which is known as "insular circular", as it is mainly characterized by pronounced curves. The typeface is compact. The circular was primarily used for magnificent manuscripts. In the 7th century the "Spitzschrift" or "insular minuscule" was developed, which saved space and made writing easier. The circular script largely disappeared from the 9th century, but the pointed script remained throughout the Middle Ages.

Irish and Anglo-Saxon monks brought their script to the mainland in the Frankish Empire from the end of the 6th century . Due to the continental scriptorias , which were characterized by insular influence, insular scripts spread in what is now France, in German-speaking countries and in northern Italy. The monasteries Bobbio , Echternach and Fulda were among the most important centers . Local writers also orientated themselves on the island models. Conversely, continental influence increased in England from the 10th century onwards, with Cluniac monks from the mainland playing an important role. The insular script incorporated continental elements. The Carolingian minuscule prevailed for Latin texts, but the insular script was able to hold its own in English texts.

The scriptoria, which used insular scripts, produced manuscripts of the highest quality, including the Book of Armagh , Book of Durrow , Book of Kells, and Book of Lindisfarne .