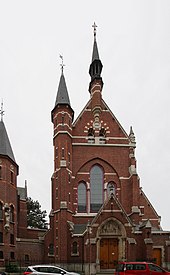 Facade of the basilica

Pope Pius IX donated the foundation stone for the church building from the Calixtus catacomb . This was laid on September 8, 1875 in the presence of the papal envoy Vincenzo Vannutelli . The single-nave, neo-Gothic church was completed in 1878 according to the plans of the architects Joseph Van Riel and Jules Bilmeyer. In the same year the Pope elevated it to a minor basilica, and the solemn consecration took place on August 17th.

The single-nave church with five bays in the nave and a narrow bay in the choir is closed off by a five-sided apse . The public chapel on the west side was enlarged in 1904. The facade has a tympanum above the main portal with a representation of Christ showing his sacred heart.

The basilica, the cloister and the garden behind it form part of the protected cityscape of Cardinal Mercierlei-De Merodelei.

The four putti around the altar were created by the French sculptor M. Dufraine. Altar, tabernacle, ciborium, candlestick and monstrance are works by the artist Armand-Calliat from Lyon. The stained glass windows are by Leon Lefèvre (Maison Lusson, Paris), who also renovated the stained glass windows of the Sainte-Chapelle in Paris.

The adjoining monastery was originally intended for the Congregation of the Daughters of the Heart of Jesus . Construction probably began shortly after June 1889. Marie de Jésus Deluil-Martiny (1841-1884), who was beatified in 1989 by Pope John Paul II, was buried in the basilica . She was the murdered founder of the community. On Saturday, September 28, 2013, this shrine was brought to Rome with the body from Berchem. There he now finds his final resting place in the main house of the order in Via dei Villini. The sisters moved with them, some to Rome and others to Marseille, where the founder was born. Since then, the monastery has been inhabited by the Chemin Neuf religious community .