The Sacred Heart Church in the Oberflockenbach district of Weinheim was built in 1957 according to plans by the church architect Albert Boßlet and the government architect Erwin van Aaken . 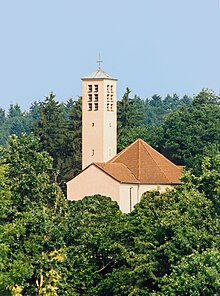 The church with its octagonal central building was the last work by Boßlet (1880–1957) and shows a strong symbolic language in the choice of colors, shapes and dimensions. The back wall of the choir and the windows of the deliberately simple church were designed by the Würzburg painter Curd Lessig. Inside and outside, the building is extremely complete. It is a square central building that tapers up to an octagon and is spanned by a tent roof . The architects again added structures for the choir area, the entrance and the free-standing campanile to the central building . The ceiling was constructed as a folding roof. With his last house of worship that he was able to realize, Boßlet brought the idea of ​​a central church to a uniquely consistent completion.

The organ was built in 1984 by Franz Heßler . The instrument has 15 stops on two manuals and a pedal .

Significance of the building

The Herz-Jesu-Kirche was named a cultural monument by the Karlsruhe Regional Council in 2007. The reason for the appointment was that the church is "a very well preserved and architecturally very high quality example of church architecture from the 1950s". The church is a cultural monument according to § 2 Monument Protection Act (Baden-Württemberg) for artistic, scientific and local history reasons. There is a public interest in its preservation.

The construction of the church was initiated after the number of Catholics in the then still independent communities of Oberflockenbach and Rippenweier in the lower Odenwald rose sharply, mainly due to the influx of displaced persons after the Second World War . The Würzburg church builder Albert Boßlet and his nephew Erwin van Aaken were commissioned by Pastor Karl Urban and the foundation council of the community to build the church as a modern church . On July 3, 1956, the groundbreaking ceremony for the Herz Jesu Church took place; The topping-out ceremony was celebrated on October 30th of the same year. Missionary Bishop Augustin Olbert consecrated the church on July 7, 1957. Since then, the church has been the place of worship for Catholics from today's districts of the district town of Weinheim : Wünschmichelbach, Steinklingen, Oberflockenbach, Rippenweier, Rittenweier and Heiligkreuz. Herz Jesu Oberflockenbach is a branch church of the parish St. Johannes Baptist in Hirschberg-Leutershausen . The parish belongs together with the other parishes in Weinheim to the pastoral care unit Weinheim-Hirschberg in the deanery Heidelberg-Weinheim within the Archdiocese of Freiburg .