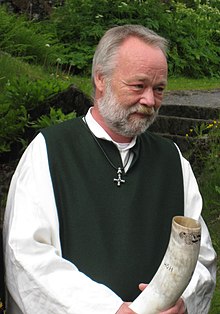 He has received various international awards for his film music, including the 1991 European Film Prize for the music for the film Children of Nature - A Journey . He also released several albums with Psychic TV , Current 93 and Sigur Rós . With the singer of the Sugarcubes , Einar Örn , he released an album in 1993 under the name Frostbite . In 1998 he recorded an album with Einar Örn and Siggi Baldursson (also from The Sugarcubes) under the name Grindverk .

Since 2003 Hilmar Örn Hilmarsson is Hoch- Gode (Allsherjargoði) of the Icelandic Ásatrúarfélagið , a religious community recognized in Iceland that practices the religion of the Germanic belief in gods.

In 2007 he was nominated for the Genie Award for the film music in Beowulf & Grendel . In June 2018, he was the President of Iceland Guðni Th. Jóhannesson for his contributions to Icelandic music and religious traditions of the Falcon North awarded.

As a member of Psychic TV