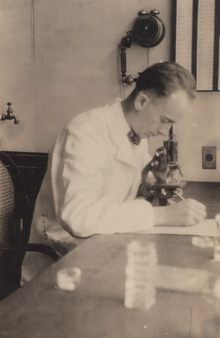 Smith attended school in Cripple Creek and Denver and became interested in science from an early age. He studied at the University of Denver ( Bachelor 1917) and researched due to his chemical knowledge in the First World War on war gases (and also in the Second World War he was concerned with war gases and headed the corresponding department of the National Defense Research Committee , for which he 1948 the Medal of Merit received). He then continued his studies at the medical faculty at Johns Hopkins University , where he received his doctorate in 1921 under William H. Howell (1860-1945). From 1921 to 1923 he conducted research at the pharmaceutical company Eli Lilly and from 1923 to 1925 at Harvard University with Walter Cannon . In 1925 he became professor and head of the Physiology Department at the University of Virginia at Charlottesville and from 1928 to his retirement in 1961 Professor of Physiology and Head of Laboratories for Physiology at New York University .

Smith was primarily concerned with the physiology of the kidney. He wrote several standard works about it and also pursued broad biological and philosophical interests. In 1928 and 1930 he traveled to Africa and Asia as a Guggenheim Fellow and researched the kidney function and composition of the body fluids of marine organisms at the Mt Desert Island Biological Laboratory in Maine , where he also owned a country house. He wrote several popular science and philosophy books. He was active in establishing the National Science Foundation after World War II .

He received the Albert Lasker Award for Basic Medical Research in 1947 and the Passano Award in 1954 . In 1958, Smith gave the George M. Kober Lecture . Since 1945 he was a member of the National Academy of Sciences , in 1949 he was elected to the American Academy of Arts and Sciences .