The Interparliamentary Union ( IPU , founded as "Interparliamentary Union for International Arbitration", French : Union interparlementaire , UIP for short ) is an international association of parliaments founded in 1889 with the aim of securing peace and promoting the understanding of democracy in all parts of the world World and respect for human rights. It was started by William Randal Cremer from Great Britain and Frédéric Passy from France. In 2016 the IPU had 167 member states and 10 associate members. The seat of the secretariat is in Geneva . The union is financed exclusively through the contributions of the member parliaments.

The Frenchman Frédéric Passy had the first idea of ​​founding a peace organization of parliamentarians in the 1870s and 1880s. He was a committed pacifist all his life and since 1881 a member of the French parliament . Passy developed the idea of ​​preventing wars and conflicts through international, state arbitration . Instead of using armed force, nations should submit to a neutral authority. In 1888, Passy and the British trade unionist William Randal Cremer met in Paris, who wanted to establish a peacekeeping British-American coalition including France. After the US Senate approved this treaty in June , Passy and Cremer made contact with various European parliaments.

A year later, on their initiative, the "Interparliamentary Union for International Arbitration" was founded in Paris as an assembly of members of the parliaments of initially European countries. Another member of the founding conference on June 29 and 30, 1889 was the Swiss lawyer Élie Ducommun .

The second conference took place in London in 1890 . At this, the Union was given a representative character for the first time: 111 MPs represented 11 European states, over 1,000 other MPs had written declarations of consent.

At the 3rd conference on November 13, 1891 in Rome , the " International Permanent Peace Office " (French: Bureau International Permanent de la Paix ) was set up with its seat in Bern , Ducommun was its first chairman until his death in 1906. The main task of the office was to coordinate the various actions of national, sometimes rival peace organizations. Ducommun was awarded the Nobel Peace Prize in 1902 for this voluntary work as "Managing Director of Peace".

The Union was able to achieve its first success with its substantial contribution to the convening of the First Hague Peace Conference in 1899. In the period that followed, many international arbitration agreements were concluded upon suggestion and mediation.

In 1905 the name was shortened to "Interparliamentary Union". 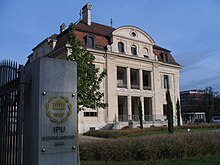 Member states of the Interparliamentary Union (2016: 167 member states). Supranational parliaments such as the European or the Pan-African Parliaments are associated members.

In addition, special conferences are held that primarily concern issues relating to disarmament and nature and the environment.

The Interparliamentary Council, which consists of two parliamentarians from each member state, is entrusted with the planning and implementation of the conferences. A president with a term of three years is elected from among its number. The current president is Abdelwahad Radi, the former President of the House of Representatives of Morocco.

The Executive Committee plays a key role in preparing the agenda and in setting up new committees. In addition to the President of the Interparliamentary Council, it has twelve other members. Its job is to support the council.

Council and other bodies

In addition to the Governing Council, there are, among others, the following bodies:

There is also the Association of Secretaries General of Parliaments (ASGP) as an advisory body. 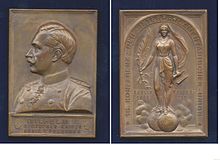