The ish NRW GmbH was a regional cable network operator in North Rhine-Westphalia with seat in Cologne . The company was the developer and operator of the former Telekom cable network in North Rhine-Westphalia, the largest contiguous broadband network in Germany. The ish product range comprised analog and digital TV via cable , high-speed Internet access and telephony .

On July 1, 2000, the American-British company Callahan Associates International took over 55% of the shares in the Deutsche Telekom cable network in North Rhine-Westphalia. Ish was founded as a subsidiary to operate and launched on October 12, 2001. In 2002 it ran into financial difficulties. Finally, ish implemented a drastic fee increase, which was examined and approved in the spring of 2002 by the regulatory authority for telecommunications and post (RegTP).

According to company information, ish recently supplied around 3.7 million households (as of April 2007). A total of 900 employees worked in the company. In the call center in Bochum another 250 people were employed. 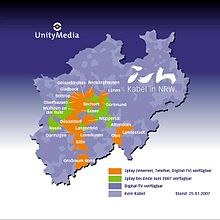 In the meantime, the company operated under the name Unitymedia NRW GmbH , which now operates as Vodafone NRW GmbH and belongs to Vodafone .

The digital programs at ish were compiled as follows:

ish broadcast all digital channels with encryption ( Nagravision ). A digital receiver and a SmartCard from ish were required for reception. The digital cable connection cost 1.41 euros / month for ish cable customers with individual user contracts (as of April 2007), the minimum contract period was 24 months.