The Ixylon is a dinghy and is considered a good-natured and versatile boat. Thanks to the double swords, it is still easy to control, even with a strong heel.

The sailing dinghy Ixylon is a unit class of the DSV . It was designed by Ulrich Czerwonka and designed in 1969 by the Berlin yacht shipyard . It was built there from 1970 to 1997. 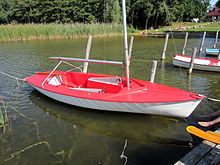 Ixylon at the German Championship 2010

Since then, the sailing dinghy has been manufactured by BTM Marine Watersport GmbH in Bitterfeld. The basic idea was to create a sporty and safe sailing boat with plenty of space in the cockpit . The kimsword design (two swords inside the boat hull) gives you a large cockpit, so that the boat is also suitable for overnight stays in conjunction with a tent cover and large tree support.

The Ixylon has also established itself very quickly in the field of regatta sailing and in 1974 the first GDR championship was sailed with it. As a result, many athletes from Olympic boat classes found a new home to continue to pursue regattas.

The Ixylon class is the only GDR boat class that survived the fall of the Berlin Wall . Since then the class has developed very actively and there are currently around 25 ranking regattas per year. In 2003 the first European Cup of the Ixylon class was sailed out in Podersdorf am See ( Austria ). Two years later the 2nd European Cup followed at the Sneekermeer ( Netherlands ).

The Ixylon, as a kimshaw dinghy in the cockpit, does not have a center sword box, so that it is valued by families with children, water hikers and sailing schools because of the large freedom of movement in the cockpit. The boat has a high degree of dimensional stability and a great righting moment, so that it capsizes late.

The Ixylon is offered in three versions. The basic version with a small foresail ( jib ), without spinnaker and without trapeze is aimed more at beginners, while the other two versions are more intended for sporty sailors. The regatta version has foil sails , genoa , travelers , spinnaker, trapeze and numerous trim options, which also results in the lower number of yardstick . Thanks to the modular concept, an entry-level version can be equipped to be more sporty as the skill level increases.

In the regatta version, the Ixylon is a demanding dinghy to sail, while in the basic version it is rather good-natured.

The mainsail has four battens , the top one being long ("battened").

The Ixylon is an agile, relatively fast dinghy that can be easily controlled by experienced crews. With a lot of wind it can get wet on board. Numerous regattas are offered each year, with the focus being on the eastern part of the country . The Ixylon is a national unit class of the German Sailing Association .