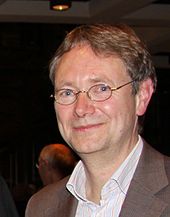 Jürgen Manemann (born October 6, 1963 in Lingen (Ems) ) is a German Catholic theologian , philosopher and director of the Research Institute for Philosophy in Hanover .

After graduating from high school Georgianum in Lingen (Ems), Manemann studied Catholic theology in Münster . After graduating, he received his doctorate in 1993 with Johann Baptist Metz and in 2000 with Jürgen Werbick . In 1997 and 2011 he was a Coolidge Fellow of the Association for Religious and Intellectual Life in America at Columbia University / New York. In 2008 he was visiting professor at the Dormition Abbey in Jerusalem . From 2001 to 2004 he taught fundamental theology as a private lecturer at the Catholic Theological Faculty of the Westphalian Wilhelms University in Münster. Several research stays in the USA followed and numerous guest lectures at home and abroad. From 2004 to 2009 Manemann was professor for Christian worldview, religious and cultural theory at the University of Erfurt . Since 2009 he has been director of the Research Institute for Philosophy in Hanover and teaches at the Gottfried Wilhelm Leibniz University of Hanover , the University of Erfurt and the University of Hildesheim Foundation .

He is u. a. Member of the Steven S. Weinstein Holocaust Symposium , Wroxton College, England; Co-founder and organizer of the Ahauser Forum Political Theology; Member of the Presidium of the Romano Guardini Foundation; Member of the Scientific Advisory Board of the Journal for Medical Ethics; Member of the Council of Climate Wise Men and City of Hanover; Member of the Advisory Board of Res Publica magazine . A Journal of Legal and Social Philosophy (2000–2009), Editor of Contemporary Theology (2007–09) and Editor of the Yearbook Political Theology (1995–2008). He is editor of the book series Philosophy aktuell ( Lit , Münster), Studies in Humanism and Atheism ( Palgrave Macmillan ) and the magazine next think. Journal of Philosophy . In addition, in 2012 and 2014 he co-organized the Festival of Philosophy in Hanover. He is co-organizer of the "Young Philosophy" format in Hanover.

As a political philosopher, Jürgen Manemann's main concern is to further develop the knowledge of the new political theology of Johann Baptist Metz in dealing with the prophetic pragmatism of Cornel West and to make it fruitful for a philosophy of politics. Both theology and politics require s. E. a new location. Manemann divides the political field into three levels: government policy, whose ethics are power, citizenship policies, whose ethics are change, and justice, which is the foundation of politics. He writes: “Knowing what is political means knowing what is fair.” The basic requirement of all politics, however, is sensitivity to suffering. Central to his thinking is the question "How should we live together?" In addition to the representative and direct dimension of democracy, Manemann wants to strengthen the participatory dimension, which for him is fundamental. In this context he calls for a new emotionalisation of politics. For him, democracy is radical democracy . Manemann advocates activating political ethics that work to ensure that the foundations of politics are preserved and improved. In this context he also calls for a transformation of Christian social ethics into activating Christian political ethics. In his political ethics he also deals with jihadism. For him, jihadism is active nihilism. In this country, according to Manemann, only a consistent policy of recognition and sensitivity to suffering can withstand it. The fascination for jihadism becomes s. E. Not caused by Islam, but by hatred. In addition, Manemann deals with questions of atheistic humanism.

For Manemann, the decisive challenges of the present are democracy and climate change. Against the talk of the Anthropocene , which has become the key word in climate policy debates, Manemann advocates a “new human ecology ”, because the time is not a further hominization of the world, but a deeper humanization of humans. The aim is to transform civil society into a “cultural society” ( Adrienne Goehler ).

For Manemann, philosophy is essentially the diagnosis of time. For this reason he also deals with the pop-cultural phenomenon hip-hop. Philosophy can learn from hip-hop what it means to diagnose time. If it is the task of philosophy to announce the time, then the philosophy of hip-hop means: "Perform what is time." The philosophical methods of this philosophy are citations, collages, samples, comments and refinements. Philosophical topoi of a philosophy of hip hop are u. a .: ›Authenticity‹, ›Self-respect‹, ›Recognition‹, ›Justice‹, ›Discrimination‹, but also ›Time and Temporality‹.