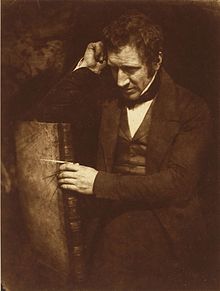 James Nasmyth in an 1844 photograph by R. Adamson and DO Hill

James Nasmyth was a son of the painter Alexander Nasmyth and attended art school and university in Edinburgh. He had acquired his manual skills as a hobby mechanic. After attending university, he went to London, filled with many plans and with models of various machines, and from 1828 worked for two years as Henry Maudslay's personal assistant in his company, H. Maudslay, Son & Field . During this time, Nasmyth also invented the nut milling machine , which was built and sold by Maudslay in 1829.

In 1834 he established himself in Manchester and founded the company "Nasmyth, Gaskell and Co." to manufacture machine tools , steam engines , steam boilers and tools for iron and steel processing . As early as 1836 he built a horizontal planing machine there , whose popularity is also recognizable by its colloquial name "Nasmyth's steam arm". He retired from his company in 1856. 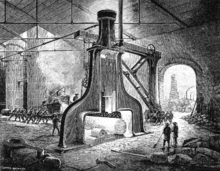 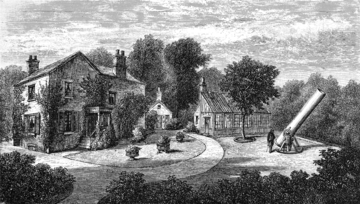 His best-known construction is the steam hammer he designed from 1839 on , in which the hammer bear is driven directly by the piston rod of a steam engine. The reason for the construction was the drive shaft for the steamship Great Britain, which can no longer be forged due to its size and the load requirements, using conventional forging processes (manual work or power-driven drop hammers ) . Ideas for a steam-powered blacksmith's hammer had already been expressed in patents from James Watt from 1784 and William Deverell from 1806; in addition, François Cavé received a patent on the active principle in France in 1836 . The design by Nasmyth, however, was only registered for a patent in 1842. The first Nasmyth steam hammer went into operation in 1843 after further structural improvements by Nasmyth's chief engineer Robert Wilson. In 1842, however, the Frenchman François Bourdon , who had gained access to a steam hammer sketch by Nasmyth in 1840, was granted a patent for one. In the same year, that is, in 1842, Bourdon succeeded in building his hammer at Le Creusot , putting it into operation and also demonstrating it on the occasion of Nasymth's visit to Le Creusot. The power of the Bourdon hammer was so high that the twelve hour work of a drop hammer was done in four and a half minutes. During the improvement work on Nasymth's steam hammer in 1843, the principle of action was improved by making it double-acting.

He also dealt with practical astronomy, developed and built his own type of telescope ( Nasmyth telescope ), researched the physical properties of the moon with the telescope, and wrote a book with Carpenter about the moon ( The Moon Considered as a Planet, a World, and a Satellite ) that was published in 1874 and translated into several languages.

The lunar crater Nasmyth and the asteroid (5680) Nasmyth are named after him.

Patent drawing of the steam hammer