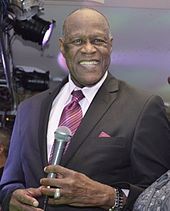 Johnny Ventura ( Juan de Dios Ventura Soriano ; born March 8, 1940 in Santo Domingo ) is a Dominican singer who is best known as a merengue musician. He is also active as a politician .

Ventura made his first radio appearances at the age of sixteen. He was a prizewinner in the competition La TV busca una estrella and other youth competitions and studied singing at the music school of La Voz Dominicana . In 1959 he took the name Jonny Ventura. He performed with the Rondón Votau Orchestra and in 1961 became a member of the group of percussionist Donald Wild .

In 1962 he sang with the combo Caribe by Luis Pérez and recorded with her his own composition Cuidado con el cuabero and La agarradera by Pérez and later his first own LP. In 1963, Papa Molina accepted him as a singer and Güirea player in the Super Orquesta San José , with whom he accompanied musicians like Vinicio Franco and Grecia Aquino during the two years of his membership .

In 1964 he founded the Combo Show , with which he recorded three LPs the following year. He traveled with the group through the USA, Puerto Rico, Colombia and Curacao. With the title La muerte de Martín , the combo with the singer Luis Martí won their first gold record.

Ventura is also politically active. He became a member of the Partido Revolucionario Dominicano in 1962 and is one of its vice-presidents. He is also a member of parliament and mayor of Santo Domingo.