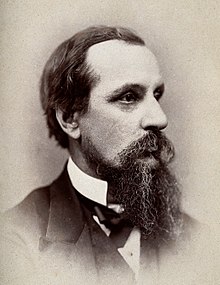 His mentor was Sir James Paget (1814-1899). As an ophthalmologist , Hutchinson worked in the London Ophthalmic Hospital in 1851. In 1854 he switched to Bartholomew's Hospital in London as a surgeon. He also worked as a venereologist and general practitioner in London. The main focus of his work was syphilis , which was prevalent in England at the time . In addition, Hutchinson was a member of the Dermatological Society of London, as well as associate and later professor at the Royal College of Surgeons . In 1909 he was knighted as a Knight Bachelor .

During his lifetime he published over 1200 medical articles. Among other things, one can attribute the first description of sarcoidosis to him in 1869 , even if he mistakenly attributed symptoms to the patient's gout .

The Hutchinson-Gilford syndrome is a Vergreisungssyndrom that in frühster childhood to aging ( progeria ) of skin, skeleton and blood vessels leads.

The Hutchinson triad is the term used to describe the three symptoms that allow a rapid diagnosis of congenital syphilis .

The Hutchinson-Siegrist-Neubauer syndrome is named after him.

After Hutchinson had read a translation of the work of the French doctor Auguste Maurice Raynaud , he introduced the term Raynaud's syndrome in the medical community and was also the first to recognize that the disease can have multiple causes.

In addition, Hutchinson is considered the "father of modern circumcision ". However, he said that it could prevent sexually transmitted diseases such as syphilis and gonorrhea , since his analysis of 330 corresponding cases had shown that these occurred less frequently in Jews (who are ritually circumcised on the eighth day after birth ) than in non-Jews . However, he failed to compare the population of Jews in London with that of non-Jews - which should have led to the opposite conclusions. However, his investigation was over decades as the cited evidence, with a precautionary circumcision in childhood, for example, the incidence rate of syphilis in order to be able to reduce to 49%.

Hutchinson believed himself again to be able to allow his patients, two years after a six-month mercurial again without hesitation sexual contacts take - a fatal fallacy , as is known today.

In addition, he was convinced until the end of his life that syphilis and framboesia were one and the same disease pattern , and traveled half the world to prove that leprosy was not a contagious disease , but this one by eating spoiled fish.