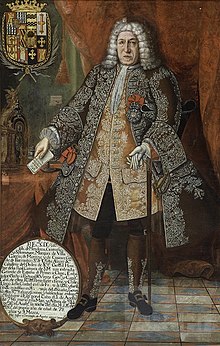 Mendoza came from a family of the Spanish nobility. He came to the court early, where he served as chamberlain to the king and was accepted into the Order of Santiago . In 1694 he married Clara de Monroy, with whom he had eight children, three of whom reached adulthood. His wife died before him. Mendoza was sent as ambassador to Venice and from 1705 served as viceroy of Catalonia .

In 1735 King Philip V appointed him Viceroy of Peru. He embarked for South America from Cádiz in May 1735. The scientists Jorge Juan y Santacilia and Antonio de Ulloa traveled with him , who were commissioned by the Académie francaise to measure the meridian arc at the equator .

Mendoza solemnly moved to Lima in January 1736 to take over his office. As a representative he named Pedro José Bravo de Lagunas y Castilla.

Right at the beginning of his tenure, a severe earthquake destroyed the Chilean city ​​of Valdivia in 1737 . After the Spanish crown had spun off the administrative districts of the Real Audiencias of Quito , Bogotá and Panamá from the jurisdiction of the viceroyalty in 1724 and formed them into a separate viceroyalty of New Granada, this decision was reversed in 1736. In 1740 it came to another spin-off, which should then last until the end of Spanish rule in South America.

The main task that Mendoza had brought back from Spain was to improve the colony's economic power. Therefore he tried to revive the trade fair in Portobelo and stop the ongoing smuggling trade in the ports of the colony. The strict requirements of the crown were preferably circumvented by privileged English slave traders who, in addition to the enslaved people, brought duty-unpaid goods to the Spanish colony on slave ships.

The efforts of the Spanish militia to stop this ultimately triggered the War of Jenkins' Ear , in which England tried to end Spanish supremacy in Latin America . In 1739 the English expeditionary army succeeded in occupying Portobelo, and the viceroy commanded the forces that fought on the side of the Spaniards against the English.

Domestically, the colonial administration was corrupt, inefficient and badly organized at the time. The geoscientists relentlessly described the conditions on their return in a secret report Noticias Secretas de Américas , which was only allowed to be published after the end of the Spanish colonial era in 1826.

During the tenure of the marqués Villagarcía several uprisings of the indigenous population, which also mixed race and impoverished Spaniards joined. The insurgents lacked the military means to completely drive out the colonial rulers, but the Spaniards were also unable to quickly suppress the revolts that continued beyond the viceroy's term of office.

In 1745 he asked for a replacement from his office. He handed over his office to the Governor of Chile, José Antonio Manso de Velasco . At the end of 1746 he made his way back to Europe. When his ship passed Cape Horn, he died as a result of an injury sustained on board. His son brought his heart to Spain, which was buried there in Cadiz.