Kürschner's German Literature Calendar (proper spelling in capital letters) is a reference work that currently contains around 12,000 bio-bibliographic entries and addresses on writers of German-language literature as well as translators, publishers, agencies, broadcasters, authors' associations, academies, literary journals and feature sections as well as literary works Lists prizes and awards of the German-speaking area. It has been documenting the contemporary German-language literary scene for over 130 years and is currently published every two years in two volumes by Verlag Walter de Gruyter . The name of the manual goes back to the Germanist Joseph Kürschner .

The handbook, first published in 1879 by Heinrich and Julius Hart as the General German Literature Calendar at Verlag Fischer in Erlangen, was adopted in 1883 by the Germanist Joseph Kürschner and was published by Göschen in Leipzig until 1902 under the title German Literature Calendar . With strategic and economic foresight, Kürschner developed the work into a popular and comprehensive reference work. From the original 1260 writers, the introduction of an author questionnaire, which is still valid today in an updated form, expanded the scope in a very short time to around 16,000 entries in the 10th year. Without any critical literary evaluation, the literature calendar presents the living authors of aesthetic literature in German - regardless of nationality and geographic area of ​​life and activity. 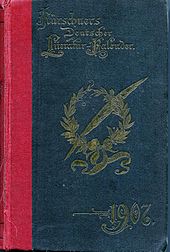 After Kürschner's death in 1902, the calendar was continued in the spirit of Kürschner by numerous editors, including at the beginning Hermann Hillger , Heinrich Klenz , Gerhard Lüdtke (1875–1944), Erich Neuner (* 1888) and Hans Strodel (* 1905). Initially, the work recorded both the “aesthetic” and the “learned”, academically active writers. Due to the abundance of material, Kürschner's German Scholars Calendar was cut off in 1925 , which quickly surpassed its older counterpart in size.

During the time of the National Socialist regime, the editor had to bow to the requirement to only publish entries on members of the Reichsschrifttumskammer. In 1936, however, he managed to publish the necrology 1901–1935 , which listed the authors who had died since 1900 with their works, so that “undesirable literature” could also be identified.

The work returned to the previous editorial principles in 1949. The editor Werner Schuder was responsible for the years from 1958 to the 1980s. In 1998, after a lengthy break in the publication, the publisher changed: the librarian and editor Andreas Klimt took on the challenge of updating and continuing the work for KG Saur Verlag in Leipzig with the 61st edition. KG Saur Verlag was taken over by Verlag Walter de Gruyter . Kürschner's German Literature Calendar has therefore been published by the original publisher since the 67th year 2010/2011 (Göschen was merged with de Gruyter Verlag in 1918).

In its 71st edition, Kürschner's German Literature Calendar includes not only entries on approx. 12,000 writers, but also over 800 literary translators, over 1000 publishers, over 500 literary prizes with the corresponding award winners, more than 600 professional associations and literary associations, literary houses and around 300 literary magazines and periodicals as well as literary agencies, culture editorial offices of radio and television companies and literary feature sections. Articles on the individual authors in alphabetical order provide information on addresses, life dates, memberships in professional and literary associations, literary prizes and the writers' publications.

The most recent publication of the two-volume work appeared in September 2018.

“When the Germanist, magazine editor and theater critic Joseph Kürschner , a busy spirit, took over the literary calendar in the fifth year of 1883 from the founders Heinrich and Julius Hart , the work was a slim little book in duodec format without economic success. Kürschner introduced the mailing of the author questionnaires and made the calendar a directory that recorded a constant rush. The 1260 names of the fourth year had become 16,000 in the tenth. The company prospered and, after Kürschner's death, found successors without any problems who continued it in the spirit of the beginning. This orientation means: banishment of literary criticism, extreme freedom from values, documentation of the facts of literary life. "

“ Roda Roda was once challenged by friends: he could achieve a lot, but not one thing. Never, never would he take first place in the furrier. The year came to an end, the new furrier appeared, and it began with: Aaba, see Roda Roda. (Whereby the caring double-A is especially nice: so that nothing can happen.) Aaba Aaba is still at the top of 'Kürschner's literary calendar' today. "