The cockatoo dwarf cichlid ( Apistogramma cacatuoides ) is a species from the cichlid family . It is one of the world's most popular aquarium fish. In contrast to other species from the genus Apistogramma , its continued existence as a species is assured, as it is bred in various aquariums. However, the aquarium fish that have been bred for numerous generations now have significantly different colors than the wild form.

The male of the cockatoo dwarf cichlid reaches a body length of eight centimeters. The females stay much smaller and only reach a length of five centimeters when fully grown, and their fins are not as long as the males. The fish have a slightly elongated and moderately high body. The mouth is relatively large in relation to the body and has noticeably bulging lips. It is characterized by three to four wavy stripes on the lower abdomen. They occur in both sexes.

Like all cichlids of the genus Apistogramma , this species only has a very small distribution area. So far, it has only been detected near the Peruvian city ​​of Pucallpa on the Río Ucayali . Its habitat are small, shallow watercourses or lagoon-like pools of water in the tropical rainforest . The fish prefer to stay in very shallow water zones with a temperature between 24 and 28 ° C. Typical is a thick layer of leaves on the bottom of the water between which the fish reside. Underwater plants and stones are also used as hiding places.

The female lays the eggs on the ceiling of a cave or under the underside of leaves. It takes care of the brood on its own, while the male defends the breeding area.

In the natural habitat, the waters in which this species has been found until now have soft to medium-hard and slightly alkaline water. Males are territorial so only one pair or one male should be kept with two females. The relatively shy fish should only be kept together with very calm companion fish. 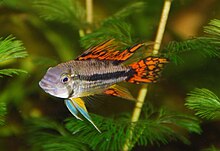 In Austria, the minimum requirements for keeping fish are defined in Regulation 486 in Section 7 and its Annex 5. See also the Wikipedia entry ornamental fish .

Especially for cockatoo dwarf cichlids, the following limit values ​​must also be observed: