The name is derived from the zoological name for the giraffe Giraffa camel opardalis , the direct translation would be giraffe thorn tree . In English there are both common names "Giraffe Thorn" and "Camel Thorn". The species name erioloba consists of the parts erio (woolly, hairy) and loba ((ear) lobes) and refers to the appearance of the fruit. 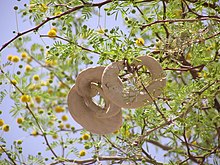 The camel thorn grows as a tree and can normally reach heights of 6 to 7 meters, but also up to 22 meters. Its branches and twigs are covered in pairs with thorns up to 5 cm long.

The flowering period begins in July and lasts until November, with the peak in September. The spherical yellow inflorescences are only a few centimeters in size and represent an important food supply for insects. The legumes have the shape of a crescent moon and are the largest among the African acacias. Their woody casing has a gray, velvety coating and contains between 8 and 25 seeds.

The camel thorn is a dominant plant species in southern Africa , especially in Namibia and Botswana . It can also be found in Angola, South Africa, Zambia, Zimbabwe and Israel.

The camel thorn can cope with rainfall of 40 to 900 mm / year and daytime temperatures of below 15 ° C to 45 ° C. It is an important source of shade in the deserts and semi-deserts. It prefers to grow in or near river beds in order to reach the groundwater with its roots up to 60 meters deep in the sandy soil .

Ear infections are treated with the ground powder of the legumes in traditional medicine. A brew from the root is used to treat toothache and tuberculosis .

In the Südwesterlied the camel thorn is sung about as a characteristic plant of Namibia (formerly German Southwest Africa ) and stands for the adverse living conditions of the local natural area.