This article covers Cape Finisterre in Galicia ( Spain ). For other terms with the same name, see Finisterre .

Location of the cape on the Iberian Peninsula 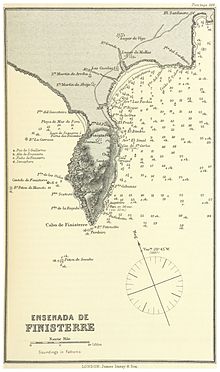 Topography of the cape on a nautical chart from 1884

The Cape Finisterre ( Spanish Cabo de Finisterre , Galician Cabo Fisterra , both derived from the Latin finis terrae , end of the earth ') is a cape on the west coast of Galicia in northwestern Spain . It is located in the municipality of Fisterra on the southern tip of a small granite peninsula that reaches 247  msnm at its highest point . Cape Finisterre is about 60 km west of the pilgrimage town of Santiago de Compostela and about 87 km southwest of the port of A Coruña . There is a lighthouse for shipping on the cape . A total of three sea battles took place off the coast in the mid-18th and early 19th centuries (see also: Sea battle at Cape Finisterre ) .

End of the Camino de Santiago

For many pilgrims, the cape is the real end of the Camino de Santiago - the Camino a Fisterra ends here. The hikers continue their way there from Santiago or visit it by bus after the end of their pilgrimage. Admission to the pilgrims' hostel in Fisterra is only granted to those who have covered the distance from Santiago to Fisterra on foot, on horseback or by bike.

"End of the world"

Further to the west (not on the mainland, but geographically part of Europe) is also the south-west of Ireland.