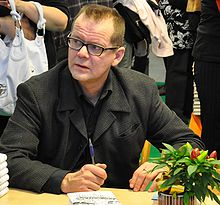 Kari Hotakainen at the Turku Book Fair in 2009.

Kari Matti Hotakainen (born January 9, 1957 in Pori , Finland ) is a Finnish writer . His works have been translated into over 20 languages, including German and Swedish . His writing style is described as ironic and socially critical.

Kari Hotakainen was born in Pori in southwest Finland in 1957. After graduating from high school in 1976, Hotakainen majored in Finnish literature at the University of Helsinki . He has two children and has been married to sound engineer Tarja Laaksonen since 1983. He has lived in Helsinki since 1986.

Hotakainen began writing as a journalist . His writing career began in the early 1980s with poetry : his debut work Harmittavat takaiskut , a volume of poetry, was published in 1982. The first children's books and novels appeared in the 1990s, and since then his production has been shaped more by prose than poetry. Hotakainen is a versatile writer; he is also an excellent playwright and has also written several radio plays. In 2002 he wrote a 10-part drama series for Finnish television. Before starting his career as a freelance writer, Hotakainen u. a. as news editor and in the advertising department of the Finnish publisher WSOY . He also wrote columns and a. for the largest Finnish daily newspaper Helsingin Sanomat . He has been working as a freelance writer since 1996.

Hotakainen's breakthrough came with the work Klassikko ("The Classic"), which in 1997 was also a candidate for the Finlandia Prize . In 2002 the novel Juoksuhaudantie was published , which received the Finlandia Prize in 2002 and the Nordic Council's Literature Prize in 2004 (German translation From the life of an unhappy man 2006). He received a dramatist award from the Nordic Drama Awards in 2006 for his acting Punahukka . The novel Huolimattomat ( The Reckless 2006) was again on the list of candidates for the Finlandia Prize in 2006. In 2010 he received the Runeberg Prize for Ihmisen osa . For Klassiko he was awarded the Thank You for the Book Medal in 1998.

On March 3, 2012, Hotakainen was involved in a traffic accident in which two people were killed. Hotakainen himself suffered injuries.

Kari Hotakainen published his first work, the volume of poetry Harmittavat takaiskut ("Embarrassing Setbacks") in 1982. In the 1980s he was initially known as a poet until his first children's book, Lastenkirja ("The Children's Book") was published in 1990 . Since then he has concentrated on prose and wrote mainly novels , plays , short stories and books for children and young people. Nevertheless, Hotakainen's background as a poet can be seen in his novels.

In his books, Kari Hotakainen often describes everyday life with irony and black humor . He is known for his clever puns and exaggerated, creative metaphors . The most common themes in Hotakainen's work are family , work, and gender differences. Often the absurd side of modern everyday life is described. The socially critical novel Bronks (1993) is his only work that belongs to the science fiction genre.

Hotakainen's first novel, Buster Keaton - elämä ja teot ( Buster Keaton - Life and Works 2001) was published in 1991. The novel is about the film actor Buster Keaton, but is not a traditional biography, but a series of fictional and surreal stories about Keaton his family's point of view, Clint Eastwood , Charlie Chaplin, and others.

Kari Hotakainen had his breakthrough in 1997 with his partly autobiographical novel Klassikko ("The Classic"), which was also made into a film. His greatest success so far is the novel Juoksuhaudantie (2002) ( From the life of an unhappy man 2006). The novel was awarded the largest literary prize in Finland, the Finlandia Prize, and later the prestigious Nordic Council Literature Prize and the Runeberg Prize. Also Juoksuhaudantie was filmed.