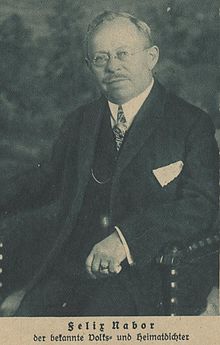 Karl Allmendinger was born the son of a miller in Mühlhausen , Württemberg . He worked as a teacher as well as organist, composer and choir director in his home diocese of Rottenburg .

From 1902 Allmendinger began to write decidedly Catholic novels and short stories under the pseudonym "Felix Nabor", derived from the early Christian martyrs St. Felix and St. Nabor , whose themes were mainly taken from contemporary and church history.

His first work of this kind, "Mysterium Crucis - A novel from the time of Emperor Nero", was received with great enthusiasm and numerous others followed in quick succession. The publications appeared mainly in the GJ Manz Verlag Regensburg, but also in the local Habbel Verlag , the St. Joseph Verlagshaus Klagenfurt and in the publishers of the Steyler missionaries in Kaldenkirchen and the Missionary Benedictines of St. Ottilien . Church newspapers, such as “ Der Pilger ” in Speyer , often reprinted the popular books as sequels.

The writer lived in Munich-Pasing from 1910, but later returned to Württemberg, where he died in 1946.

In the period between the two world wars, his works were very popular within the Catholic milieu and were not missing from any parish library. Ostracized because of their unmistakably Catholic character during the Nazi era, they remained so afterwards, as they often also had patriotic content, such as the story "The Girl of Spinges" about the historical struggle of the Tyroleans against the French. Today Felix Nabor's poems are almost completely forgotten and can only be obtained as antiquarian. Only Nabor's first novel, “Mysterium Crucis - A Novel from the Time of Emperor Nero”, saw a new, modernized edition in 1963; A Swedish translation was published as early as 1962, and a Norwegian one in 1968.

Bishop Johann Baptist Sproll , the well-known Nazi opponent, paid tribute to the writer from his diocese on his 65th birthday with the words:

“ Our compatriot Felix Nabor is an excellent and fruitful writer and - what is of particular value to us - a genuinely Catholic writer. His works bring edification and elevation, refreshment and joy to every home. I wish them the widest distribution in my diocese. "

In the birthplace of Mühlhausen, the "Felix Nabor Primary School" is named after the poet.