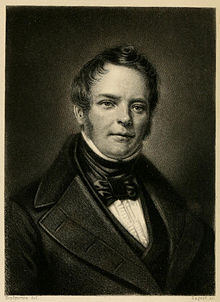 After studying in Heidelberg and Berlin , Zumpt was awarded a Dr. phil. did his doctorate and taught at the Friedrichwerdersche Gymnasium in Berlin until 1821 . In 1825 he became a professor at the Joachimsthal Gymnasium and in 1826 at the same time a teacher of history at the Berlin Military Academy. He turned down a call to the University of Kiel (1826). In 1827 he followed a call to the Berlin University , where he was associate professor from 1827 and full professor of classical philology from 1836. From 1835 Zumpt was also a full member of the Prussian Academy of Sciences .

Among other things, he wrote the "Latin Grammar" (1818), which was published several times.

Zumpt's Latin Grammar , which first appeared in 1818, contains many memorable verses that should make it easier for students to learn the difficult grammatical rules. For example, he summarizes the irregular masculine of the Latin third declension in the following verses:

An after-effect of this sonorous poetry can be found in the chemical didactic poems by Emil Jacobsen , who named Karl Gottlob Zumpt as a stimulus in the foreword to his rhymed text The Reactionary in the West Pocket (7th edition, Breslau, 1862). In Jacobsen's work The Miracles of Uroscopy, or Zumptuarium uropoëticum (Breslau, 1861), Zumpt is even mentioned in the title. The Greifswald cantor August Wagner set the Merkverse (“The Latin gender rules of the Zumpt grammar”) to music as a musical joke.