The Friedrichswerdersche Gymnasium (also: Friedrich-Werdersches or Friedrichwerdersches Gymnasium ) was one of the traditional Berlin humanistic high schools with many well-known students.

On the orders of the Great Elector , the grammar school was founded in 1681 as part of the expansion of the city of Berlin under city patronage and was open to the French and German Protestant denominations. Joachim Lange became rector in 1698 , later a theologian at the University of Halle . Classes were held until the fire in 1794 in the town hall of Friedrichswerder instead. In 1742 the grammar school merged with the Friedrichstadt grammar school. Friedrich Gedike established Berlin's first grammar school teachers' seminar here in 1787 , the seminar for learned schools , with six to eight seminarians - including Friedrich Schleiermacher  - and made the school known, especially through the public exams. Around 1800 only 50 boys attended the school on Oberwasserstraße at Werderschen Markt . From 1825 on, classes took place in the “Fürstenhaus” on Kurstraße, at times together with the trade school .

In 1875 they moved into a new building in Dorotheenstraße , which had been built according to an overall concept by City Inspector Hanel von Hermann Blankenstein , together with the Dorotheenstädtische Realgymnasium in Georgenstraße; the grammar school on the east corner of Friedrichstraße , the Dorotheenstädtische Realgymnasium on the corner of Georgenstraße. In 1908 the grammar school moved into the school building designed by Ludwig Hoffmann in Berlin-Moabit on Bochumer Strasse (from 1937 used by the Beuth University of Technology Berlin , today used by the Berlin State Technical School ). There was also the Friedrichswerder high school (previously a trade school ).

The high school existed until the evacuation due to air raids by the Allies on Berlin in 1943/44. 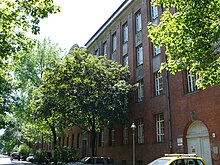