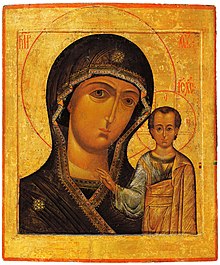 Icon of Our Lady of Kazan (copy)

The Kazan Cathedral ( Russian Каза́нский собо́р ) in Moscow is located on the northern side of Red Square and is one of the most famous Russian Orthodox church buildings in Russia and beyond. It was also one of the first churches in Russia to be rebuilt after the collapse of the Soviet Union in the early 1990s . Its full name is "Cathedral of Mary of Kazan ".

The building of the Kazan Cathedral was first erected in its place in the 1620s, although the exact date of construction has not been recorded. It is known, however, that the building of the church was donated by Prince Dmitri Poscharsky . Poscharski, who a few years earlier had organized the successful popular uprising against the Polish-Lithuanian invaders in Russia together with the merchant Kuzma Minin , had the cathedral built in memory of the victory over the Poles and consecrated it on the icon of Our Lady of Kazan , that Icon that is especially venerated by Orthodox believers as wonderful. Poscharsky was also convinced that the icon of Our Lady of Kazan brought his people's army the victory over the occupiers.

Originally the new church was made of wood, as was customary in Russia at the time. In 1635 it burned down completely. Thereupon Tsar Michael I had the cathedral rebuilt in stone. The new building was inaugurated on October 15, 1636. Since then, the Kazan Cathedral has been one of the most important church buildings in Moscow. Every year on the anniversary of the liberation of Poland-Lithuania there was a solemn cross procession from the Kremlin to the cathedral, led by the patriarch and the tsar. In the middle and end of the 17th century, the church building was expanded and received, among other things, a bell tower and a newly designed parade entrance.

Another historically important event in the Kazan Cathedral was the solemn service on April 26, 1755 on the occasion of the establishment of Moscow University .

A few years after the October Revolution in 1917, the cathedral was taken over by the so-called Renovationskirche, a schismatic movement within the Russian Orthodox Church that arose during the February Revolution and supported the new rulers. Although the cathedral was thoroughly renovated in the late 1920s, it was demolished in 1936. In its place, a temporary building for the Communist International was built, and later a summer café.

In 1990, at the suggestion of the Church and the public, the Moscow City Council decided to have the Kazan Cathedral rebuilt in its original location. Over the next three years the church was built with donations and funds from the city budget and consecrated on November 4th (the anniversary of the victory over Poland-Lithuania, today again officially celebrated as People's Day). The rebuilding of the Kazan Cathedral was one of the first rebuilding measures for Russian Orthodox churches that were destroyed during the Soviet era.