Our Lady of Kazan

from Wikipedia, the free encyclopedia
This is the spotted version , flagged on July 9, 2020 . There is 1 pending change that has yet to be viewed. 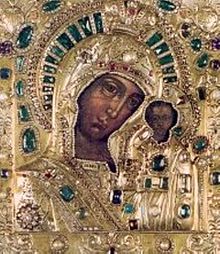 An early icon of the Kazan Mother of God type

The Kazan Mother of God ( Russian Казанская Богоматерь ) also called Kazanskaya , is an icon of Mary, the mother of Jesus , which is regarded as miraculous . She is one of the most venerated icons in the Russian Orthodox Church .

The origins of the tradition of the miraculous image lie in legendary semi-darkness. It is said to have been found in the city of Kazan shortly after the conquest of the Tatars by the troops of Ivan the Terrible on July 8, 1579, by a little girl named Matryona in the ruins of her burned down house after the Blessed Mother appeared to her in a dream . Preserved until 1612 in the Theotokos Monastery, which was built in Kazan on the site of the apparition, the icon with its miraculous power represented the power of Orthodox Christianity in a largely Tatar-Muslim environment. During the armed conflicts of the 17th century, Our Lady of Kazan was considered a supporter of the Russian cause and in 1612 she accompanied the troops that liberated Moscow from the Polish invasion army during the time of turmoil . The miraculous image remained closely connected with the Romanov dynasty that came to power immediately afterwards . From 1612 to 1920 it (or a copy of it) was venerated in the Kazan Cathedral of Moscow . Where the Kazan original from the 16th century was located from the beginning of the 18th century to the Russian Revolution is contradictory portrayed in Western literature. In 1709 it was invoked in the fight against Sweden, in 1721 Peter the Great is said to have brought the image of Mary (or a copy) to St. Petersburg. Initially kept in the Alexander Nevsky Monastery , it is said to have come to the Church of the Nativity of Christ in 1737. In 1812, Mikhail Kutuzov secured the support of this St. Petersburg image before the fight against Napoleon . After the victory over the French, the icon was built there the largest church in the capital, the Kazan Cathedral . Copies of the Kazan image of Mary were also venerated in other Russian cities, often in specially built churches, such as Moscow (around 1620–1630), Jarosław , Nowaja Usman and Almaty (1857).

On June 29, 1904, the copy of the miraculous image kept in Kazan was stolen from the cathedral there, presumably because of its precious frame. The painting was probably burned. The version in St. Petersburg is said to have been sold by the Bolsheviks around 1920 . Other speculations tell of a stay in what was then Leningrad . In any case, the original Kazan original is now considered lost.

A picture of the Blessed Mother of Kazan , which is not necessarily identical to the former Kazan, Moscow or Petersburg icon , whose creation is estimated by experts to around 1730, appeared in the western art trade in the 1970s and was used by the Blue Army of Mary for the Byzantine Church in Fátima acquired in Portugal . In 1993 the icon was made available to the Polish Pope John Paul II , who set it up in his private study. Eleven years later, he tried to personally deliver the icon to the Moscow patriarch , which failed because of his resistance. In 2004 the picture was offered to the Russian side unconditionally. On August 26, it was presented to the Catholic faithful again in St. Peter's Basilica , before it was handed over two days later by Cardinal Walter Kasper and Cardinal Theodore Edgar McCarrick to the Patriarch of the Russian Orthodox Church in Moscow, Alexius II . On July 21, 2005, the icon of Alexius II was handed over to the Cathedral of the Annunciation in the Kazan Kremlin , without the patriarch mentioning the role of the Pope in this process during the ceremonial handover, as stated by Mintimer Shaimiev , the president who was involved in the event the Republic of Tatarstan , however, caught up.

The Blessed Mother of Kazan is venerated by believers as the patron saint of the city of Kazan and beyond that of all of Russia.

Remembrance days of Our Lady of Kazan in the Orthodox Church are July 21st and November 4th. The latter is now also the " People's Day ", a national holiday in Russia.

Commons : Our Lady of Kazan  - Collection of pictures, videos and audio files