Remains of Qassam rockets fired at Israel from the Gaza Strip

Remains of an exploded Qassam rocket. Easy to see: the simple spot welds . 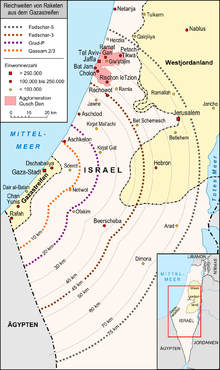 Ranges of missiles from the Gaza Strip

The Qassam rocket (or Qassam rocket , Arabic صاروخ القسام, DMG Ṣārūḫ al-Qassām ) is a surface-to-surface missile developed by the Palestinian Hamas . It is named after Sheikh Izz ad-Din al-Qassam ( 1882 - 1935 ,عزّ الدين القسّام), a radical Islamic clergyman and Arab partisan who already fought against the French and British . The name of the military-terrorist wing of Hamas - the Qassam Brigades - also refers to him.

According to Hamas , the first Qassam rocket is said to have been developed by Nidal Fathi Rabah Farahat and manufactured under the direction of Adnan al-Ghul . He is known as the "father of Kassam" and was deliberately killed in an attack by the Israeli military in October 2004 .

On April 16, 2001, the first impact on the territory of the State of Israel was recorded. According to other sources, the first Kassam was used in October 2001.

All four previous models are simple steel constructions with warheads without an active control system. The production is done by hand, the precision of which lags significantly behind that of the industrially manufactured types (see photos above), but has since been significantly improved in some details. The accuracy, reliability and effectiveness are still comparatively low.

The solid propellant is made in spite of its high hazard potential using simple equipment in basements, barracks and various workshops. The stabilizing fins are welded to the steel tube drive cell, the warhead and percussion fuse are screwed on. The fuel mixture of sugar and potassium nitrate is u. a. also used by amateur rocket makers in various countries. The mixture is hygroscopic , which is why the nozzles must be hermetically sealed.

Depending on the variant, the warhead contains 5 to 12 kg of TNT , which is in solid form via various smuggling routes, e.g. B. through tunnels under the border with Egypt or by sea, bypassing the Egyptian blockade, is imported. The structure of the warhead essentially corresponds to that of a fragmentation bomb , which means that it can also be used to combat people.

A collapsible mount , which is easy to transport and can be quickly assembled and dismantled at the launch site, serves as the launching device . It is made in different sizes to match the rockets. The Align the launch mount done with compass and inclinometer .

The missiles will be used to attack Israeli cities and settlements. Most of the killings occurred in the city of Beit Hanun in the Gaza Strip . The destinations were mostly Sderot, Ashkelon , Netiwot and the surrounding kibbutzim . The first two Israeli fatalities occurred on June 28, 2003, and by May 2008 the number of Israelis killed by Qassam rockets rose to 15. By November 2008, over 3,700 rockets hit Israeli territory.

Despite the extremely simple design of the Qassam missiles, defense against them with currently available systems is only possible with great effort. The main problems are above all the small size and the short flight time of the missiles, which requires a highly modern and thus expensive defense complex.

Currently, only an early warning system called Red Color (originally Red Dawn ) is available, which was installed in most cities in southern Israel. In Sderot this results in an advance warning time of around 15 seconds. A prototype of a laser-based Tactical High Energy Laser system was developed by the USA and Israel as a defense against the Katyusha rockets of Hezbollah and other projectiles, but was abandoned after 10 years of development despite some positive, but generally unsatisfactory test results. Israel has chosen to develop a defense system based on anti-missile missiles . It trades under the name Iron Dome (Eng. "Iron dome") and has a range of approx. 5 to 70 km. On July 19, 2010, the Israeli armed forces reported the system as operational; the first two batteries were to be stationed in November 2010 at Sderot on the border with the Gaza Strip . Nine systems have been in use since July 2014, and a gradual expansion to a total of 15 defense positions is to take place over the next few years.

Other sources report that newer Qassam missiles have a longer range of 16.5 km up to 40 km. Almost all types are now built in a short and medium-haul version, which means that dimensions, weight and range can vary greatly. In November 2012, Hamas designated the Fajr-5 with a range of up to 75 km as the improved Qassam missile M-75 and used it against Tel Aviv.