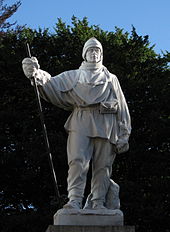 Scott had attended the Slade School of Fine Art from 1900 to 1902 . Three of her busts are now in the collection of the National Portrait Gallery (London) . As an object of illustration, she is represented there by 13 photographic portraits by other artists.

She also created two statues depicting her first husband, the polar explorer Robert Falcon Scott . He died after reaching the South Pole in Antarctica . One of these statues is in Christchurch ( New Zealand ), the other is on the Waterloo Place in London . In addition, the statue of the captain of the Titanic , Edward John Smith , in Lichfield ( Great Britain ) goes back to her.

Kathleen Scott is said to have had a brief affair with the widowed Fridtjof Nansen , which is said to have happened around 1911. She was the grandmother of the sculptor Emily Young and the author Louisa Young .