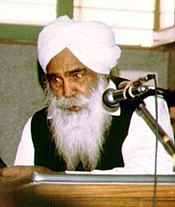 Param Sant Kirpal Singh (born February 6, 1894 in Sayyad Kasran, Punjab , India , † August 21, 1974 ) is considered to be an important spiritual master of Sant Mat . He was a student of Baba Sawan Singh . Kirpal Singh was for many years President of the World Community of Religions founded in 1957 .

As a teenager, Kirpal Singh was confronted with religious intolerance , bigotry and nationalism in his family environment . He then studied Buddhism , the writings of the Sikhs , Christianity , Islam and the Zoroasters , when, according to tradition, the master Baba Sawan Singh appeared to him within seven years before he first met him as a person in real life.

In the course of his studies, Kirpal Singh recognized for himself that all religions describe the same fundamental truth and that the human birthright is self-knowledge and knowledge of God. After he himself had attained spiritual perfection under the guidance of his master, he continued the great work in Delhi on his behalf (from 1951 in the Sawan Ashram). Kirpal Singh came to believe that life should be served in the ideal of unity - the brotherhood of men under the fatherhood of God.

In 1939 Kirpal Singh wrote the Gurmat Sidhant , a basic religious text that he published under the name of his master. His aim was to create mutual understanding among the opposing religions. In 1956 he was invited to give a speech to the General Assembly of UNESCO for the first time and gave his keynote address on world peace in the atomic age . Kirpal Singh was then elected annually for fourteen years as President of the World Community of Religions, which he founded in 1957.

During three world trips - 1955, 1963 and 1972 - he visited important cities in the western world and met with politicians, religious leaders and public figures. At a central point, he consistently emphasized the importance of self-knowledge and knowledge of God and spoke out in favor of selflessly putting oneself in the service of one's neighbor.

At the beginning of the seventies he initiated the first world conference on the unity of man (Unity of Man) in New Delhi from February 3 to 6, 1974 . Leading figures from India from public life, politics and religion as well as delegates from 18 countries and a large audience attended the conference. This ecumenical achievement is generally regarded as the culmination of his missionary work.

Kirpal Singh was then invited by the Indian government to address the Indian parliament. He delivered this speech on August 1, 1974, as the country's first spiritual leader.

The following key statement was made by Kirpal Singh at the Unity of Man conference in 1974 as a call to humanity:

I would like to ask all of you to spread what you have heard here everywhere you go. It calls from the roofs so that happiness and peace may come to earth. I pray to God, and you pray with me, that He will give us His special grace and make arrangements for us to have a first-hand experience of Reality. The ideal that stands before us is: We are all one!

Those who claim to love the invisible God but show neither consideration nor love for their visible fellow human beings are on the wrong path.

Since the time of Kabir there has been an uninterrupted line of followers leading to Kirpal Singh, as shown in his book A Great Saint: Baba Jaimal Singh: His Life and Teachings. He also stated on many occasions that "there is always a Living Master on earth". Although he did not officially appoint a successor, he gave advice to his students during his lifetime. Some of his students assumed the role of masters.