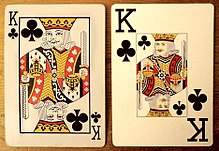 Kings of the cross

or clubs are a color of the French playing cards . In the German paper it corresponds to the color acorn

. The original French name is Trèfle (German: Klee ), the card symbol represents a three- leaf clover . The Italian name is Fiori (flowers). In English , cross is referred to as clubs (bars, clubs) based on the color Bastoni of the Italian-Spanish image.

In Germany , this playing card color, in particular also by the International Skat Code , is called a cross , in Austria, however, it is almost exclusively based on the French name as a club , as is the case with bridge , where the French names generally prevail, as well as Cœur instead of heart .

The character Zeichen is already included in the CP437 and thus also in the WGL4 . A black ein and a white ♧ cross are defined in Unicode :