The blue body is a segment of a sphere; the pink rest of the body as well

Instead of and, it is sufficient to specify the angle of the base circle (see illustration). The following applies:

There are therefore several formulas, depending on which of the quantities is given.

For is and the spherical segment is a hemisphere :

For is and the sphere segment is a whole sphere : 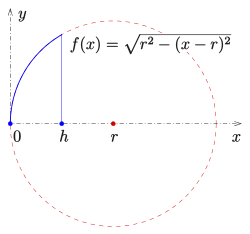 After the Pythagorean theorem applies: . Dissolving the bracket gives:

The volume of a spherical segment results from the volume integral for solid of revolution for the circular arc :

Accordingly, the resulting shell surface of a spherical segment (no base circle) of the area formula for rotation surfaces

And with base circle: .