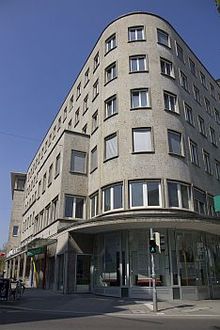 The Kulturgemeinschaft Stuttgart e. V. is one of the largest visitor organizations for art and culture in Germany. It emerged in 1924 from the workers' education movement under the name Stuttgarter Volksbühne e. V.

In 1920, the association for the promotion of popular education in cooperation with free trade unions first came up with the idea of ​​founding a Volksbühne in Stuttgart. The association grew to 10,000 members between 1920 and 1924. The Volksbühne principles of changing places and the unit price applied. The Stuttgart private theater Deutsches Theater under the dramaturgical direction of Frank Thiess , whose programs were regarded as masterpieces of popular art appreciation, was made available in its entirety to the association due to the consequences of inflation . In 1924 the Stuttgarter Volksbühne e. V. founded. In the same year, contracts were signed with the Württemberg State Theater (today's Stuttgart State Theater ) on so-called closed performances. There was no longer enough space in the following years. In 1927 the first edition of the monthly magazine Die Bühne appeared (monthly papers of the Stuttgarter Volksbühne eV) .

Since then, the aim of the Stuttgart Volksbühne has been to enable people of all social classes to have access to cultural events through social democratic and trade union educational work . This was largely made a reality through the membership fee. With rotating placement in the theater, the feeling of always having to sit in the same place should be avoided. By participating in the events, critical judgment should be sharpened and the passive attitude of the audience should be transformed into active participation.

When the National Socialists seized power in 1933, the Volksbühne's idea of ​​intellectual freedom was stripped of its foundation. This meant the temporary end of artistic freedom and the self-determined work of the Volksbühne Stuttgart. In 1934 the nationalist organization Kraft durch Freude named the Stuttgarter Volksbühne e. V. in the cultural community of Stuttgart .

In contrast to many other Volksbühne in Germany, the Stuttgart Volksbühne was able to start a new establishment just a few weeks after the end of the war in May 1945 with the help of the German Federation of Trade Unions . In the same year, the cultural community joined the German Trade Union Federation as an independent organization and was converted into a registered non-profit association in 1961 with the aim of conveying art and culture to the broadest possible section of the population . Through membership fee all access should be guaranteed to culture. On July 21, 1945, the cultural community's first event took place in the Great House of the State Theater. Beethoven's Ninth Symphony was also the first cultural event in the German western zone . From 1945 to 1946 the cultural community registered 43,200 visitors in 36 performances. They took place in the afternoon at 4 p.m., for which the employees among the members accepted loss of working time and the associated loss of earnings. The number of visitors increased with growing offers. After the currency reform in 1948, there was a transition from card brokerage via works councils to individual membership. In 1948 the number of members rose to 14,000, and a lack of space prevented further expansion of the cultural community. The cultural magazine here first appeared in December 1958 cultural community of the German trade union federation would not only inform it, but also stimulate critical experiencing the cultural scene.

In 1990 the newspaper Kultur replaced the culture magazine in order to meet the changed demands of the members. In 2006 it received the iF Design Award 2006 for its design quality.

With a wide range of content and prices, the Kulturgemeinschaft Stuttgart gives users easy access to cultural life at reduced prices. In the greater Stuttgart area, the cultural community has more than 50 partners with whom it cooperates in the fields of concert, opera, ballet and theater. These include large venues such as the Stuttgart State Theater , the Stuttgart Theater , the Liederhalle culture and congress center and the Stuttgart theater . Other venues with which the Kulturgemeinschaft Stuttgart cooperates are the Friedrichsbau Varieté , the Renitenztheater , the Forum Theater , the Theater der Altstadt , the Theater Rampe, the Tri-Bühne , the Wilhelma Theater , the Forum am Schlosspark, the Lindenhof Theater , the Württemberg state theater in Esslingen and the Backnang town hall. In other areas such as literature, cinema and jazz, she works together with the Literaturhaus Stuttgart, the Arthaus Kinos, the BIX Jazzclub and others. In the art section there are collaborations with more than 30 partners. In the Stuttgart area, for example, there are the Stuttgart State Gallery , the Stuttgart Art Museum or the Württemberg State Museum . Further partners are the ZKM Karlsruhe , the Städelmuseum Frankfurt and the Kunsthalle Mannheim .