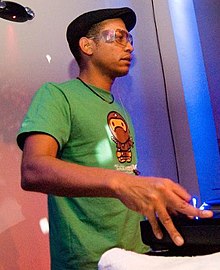 Daniel Williamson first spoke about his childhood, which he spent with foster parents , in a radio interview on BBC One with Fabio & Grooverider . The father of his separated birth parents is said to be Egyptian and his mother Ugandan. More or less on his own, he took refuge in music before he learned the trumpet , played piano and drums in various school bands and soon discovered jazz for himself. As a teenager, he roamed the clubs of West London and increasingly discovered DJing. In the meantime he is one of the notable drum and bass artists of our time.

He was nicknamed "Bukem" when he was at school because of the similarity of his name to a character in the American crime TV series " Hawaii Five-Zero " , which was very successful in the 1970s . At the end of an episode, Detective Steve McGarrett usually gave his partner Danny Williams the order to arrest the criminals, often with the phrase "Book'em, Danno!" (Meaning: "Buy / get them, Danno!").

Different theories are circulating about the meaning of “LTJ” . Possible resolutions are "El DJ" (Spanish for "the DJ"), "Light The Joint" or "Long Turn Jockey" (because of its long sets that send the ravers on an extensive, varied sound journey).

In 1991 he founded his own label "Good Looking Records". He always appears live with MC Conrad or sometimes with DRS. In addition to the live recordings of the "Progression Sessions", he published a series entitled "Earth" with collections of unreleased, ambient drum and bass tracks. Another sub-label of Good Looking was subsequently created for downbeat tracks, "Good Cooking Records", or the sub-label "Looking Good Records" (LGR).

LTJ Bukem produces and plays a "lighter" version of drum and bass, which is based on the soul , funk and jazz of the 1960s / 1970s. The ambient and chill out areas above fast jazz breakbeats around 170 BPM are characteristic. With this kind of atmospheric drum and bass, he increasingly opened the genre to listeners outside of this club scene .

His distinctive glasses were an advertising stunt by a Berlin designer (IC Berlin).

Before each gig, like a live band, he does a sound check on the turntables and sound system in order to deliver the best quality.

As the label boss, LTJ Bukem has come under increasing criticism in recent years because he concentrated too much on the live events in his work and neglected the label work. The last releases of Good Looking were a few years ago before a new release was released on Good Looking in 2008. Bukem justified the long waiting phase until the new release with the fact that he and the main crew took a break that they would have deserved after 10 years of work without a vacation. In addition, it has become increasingly difficult to organize the largest drum and bass label with around forty artists. With the downsizing and the successful release, Good Looking now seems to be more active again and to rediscover the vinyl market believed to be dead.