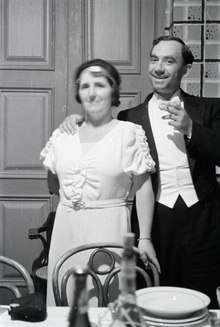 Lazar Linsor Wechsler (born June 28, 1896 in Petrikau , Russian Poland , today Poland ; † August 8, 1981 in Zurich ) was a film producer of Polish and Austrian roots . He was the central figure in Swiss cinema during its early stages in the 1930s and during its heyday in the 1940s. With Praesens-Film , founded in 1924 , he ushered in the early phase of Swiss film, which until then has only produced a few individual productions, but no organized, continuous filmmaking.

The son of a wealthy Jewish couple from Poland came in 1914, shortly after the outbreak of the First World War , in the Switzerland . There he studied engineering at the ETH Zurich , which he completed in 1919 as a graduate engineer. Subsequently he worked in bridge construction. He was Austrian until he received Swiss citizenship in 1923 . 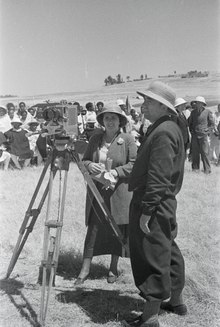 Wechsler's on Mittelholzer's flight to Abyssinia in 1934

On March 19, 1924, the so far completely inexperienced in film founded Praesens-Film with a share capital of CHF 10,000 . The company, which rose to become the largest and for a long time the only significant Swiss film company in the 1930s, weakened economically in the early years and concentrated on the production of short advertising films, advertising slides, city documentaries and flight reports. With the beginning of the sound film era, Praesens began the regular production of feature films. By the end of the 1930s, the company succeeded in bringing Switzerland, which was previously completely insignificant from a cinematic perspective, the reputation of a committed film nation. Wechsler succeeded in building up a permanent team - consisting of the director Leopold Lindtberg , the screenwriter Richard Schweizer , the cameraman Emil Berna , the musician Robert Blum and the film editor Hermann Haller - which stood for technical and artistic quality. Wechsler knew how, despite a lack of commercial and organizational talent, with daring and a feeling for interesting topics to film some difficult, idiosyncratic and interesting subjects, something that nobody else in Switzerland had dared and achieved at the time.

Wechsler's film productions comprised local patriotic defense and edification materials, dark crime stories with a regional background and humanistic dramas. The Praesens film Marie-Louise received a screenplay oscar. The refugee story The Last Chance the Praesens film brought international attention and Wechsler offers for co-productions from Hollywood. As a result, Fred Zinnemann staged Die Gezeichen (1948) with Praesens in the urban wasteland of southern Germany . However, Wechsler's plans to go to Hollywood dispersed, and after a few flops in the 1950s, the Praesens film declined in importance.

In 1966 Lazar Wechsler largely withdrew from the feature film business and afterwards produced almost only documentaries for Swiss television : about 2000 years of Israel , Israel between yesterday and tomorrow or the challenge of life . He found his final resting place in the Sihlfeld cemetery .