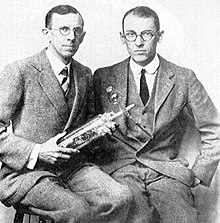 Lester Halbert Germer (born October 10, 1896 in Chicago , Illinois , † October 3, 1971 in Gardiner , New York ) was an American physicist . Together with his colleague Clinton Davisson , he experimentally demonstrated the wave properties of electrons for the first time in 1927 .

After graduating from Columbia University , Germer worked at Bell Telephone Laboratories in New York City under the supervision of Clinton Davisson . By bombarding a single nickel crystal with an electron beam, the two succeeded in demonstrating the wave properties of electrons predicted by Louis-Victor de Broglie .

In 1928 he became a Fellow of the American Physical Society .