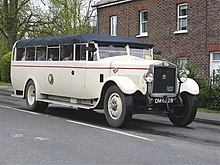 The Leyland Lioness with the type designation LC was a bus chassis from the British commercial vehicle manufacturer Leyland Motors . It is based on the Leyland Lion and is practically its long-nosed version . At Leyland, the female form of the name traditionally referred to the version as a hooded vehicle or, as it was understood at the time, the normal version. The chassis was built from 1926.

The Lioness part as well as the Lion to the first chassis, which have been specifically designed for use as a bus. The advantage of the new construction was the lower frame, which made it easier for passengers to board. The use of pneumatic tires was also new. With the general use of pneumatic tires, the type designation was preceded by a "P" for pneumatic .

The chassis was mostly provided with superstructures as a comfortable coach for 24 to 36 passengers, and open excursion buses were also built. The bodies came from Burlingham , Harrington , Wray's Motor & Body Co. Ltd. and Weymann . In addition to the pure long-nosed version, there were also versions with a half-sided driver's cab, which was far preferred. On the one hand, it offered the driver a good all-round view and, on the other hand, easy access to the engine. These chassis were given the letter S for side-type ( e.g. PLSC ) in the type designation.

The engine and equipment largely corresponded to the Leyland Lion offered at the same time .

A fire engine was also developed based on the Lioness . This made sense because the bus frame, which was lower than that of trucks, resulted in a lower center of gravity for the vehicle, which enabled a long turntable ladder to be set up.