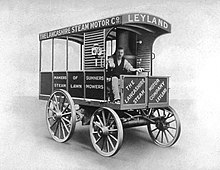 Leyland Motors was a British vehicle manufacturer . The successor company Leyland Trucks is now part of the Paccar Group and produces trucks of the DAF brand . The bus division came to Volvo in 1988 .

Between 1920 and 1923 some were passenger cars of the type Leyland Eight manufactured by JG Parry-Thomas 1926 km with about 275 / h a land speed record set up. In addition, the first attempts were made with diesel engines , which were produced in series from the 1930s. During this time the company rose to become one of the most important British truck and bus manufacturers.

Leyland also long contributed to a British peculiarity: the milk floats (literally “milk rafts”) called delivery vans , with which households were supplied with fresh milk every morning. With these, Leyland had a high market share for a long time.

In the 1950s, the competitors Scammell and Albion were taken over. From 1953 Leyland engines were used by the Dutch manufacturer DAF , which later produced Leyland diesel engines under license . In 1955 Leyland took a stake in the Indian company Ashok Leyland . In 1962 the competitor AEC was bought up. In 1967, Aveling-Barford, a manufacturer of construction machinery, was bought.

At the end of the 1960s there was a merger with the other British manufacturers BMC Trucks and Guy , which merged under the name British Leyland Motor Corporation . After massive problems, BLMC was nationalized in 1975 , but BLMC continued to lose market share.

The new British government under Margaret Thatcher led a re-privatization of the British automotive industry. In 1982, a large part of BLMC became the Austin Rover Group . While the Leyland Sherpa delivery vans and van models came to Freight Rover , the trucks were now with Leyland Trucks and the buses with Leyland Buses . In 1987, Leyland's bus division was spun off from what had become the Rover Group and sold to Volvo Buses on March 30, 1988 .

Leyland Trucks, together with Freight Rover, was incorporated into Leyland DAF , a company founded jointly with DAF , in which the Rover Group had a 40% share. In 1993 Leyland DAF went bankrupt. LDV and Leyland Trucks Limited , among others, emerged from the bankruptcy .

Leyland Trucks Ltd. continued to produce trucks at the Leyland location, which, in addition to its own vehicles, were also derived from DAF trucks. In 1998 the company was taken over by the Paccar Group, to which DAF now also belonged. In 2000, Leyland Trucks transferred the production of the Foden trucks.

With the introduction of the DAF LF , the official use of the Leyland brand on vehicles ended. The DAF LF, designed and built by Leyland Trucks, won the Truck of the Year award in 2002 . In 2005, Leyland Trucks started the automatic painting of truck chassis by robots on a continuous line, a novelty in the industry. In 2006 the production of the Foden trucks ended after the decision to discontinue the Foden brand. Apart from LDV, there was no longer an English commercial vehicle manufacturer.

On April 17, 2008, the 300,000. Truck produced by Leyland Trucks, the customer Mark Armstrong Transport Ltd. took his DAF XF 105 straight from the assembly line.

In 2008 Leyland Trucks produced 24,700 trucks in the assembly plant and DAF had a 27.3% share of the UK market. In April 2009 Leyland Trucks received the prestigious Queens Award for Enterprise in International Trade .

Leyland only manufactured the chassis and engines for the buses , the superstructures were manufactured by various bodywork companies on behalf of the bus operators . 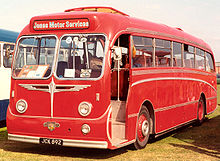 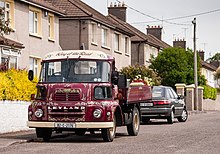