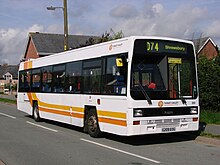 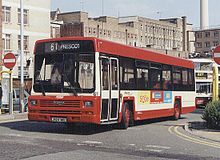 The Leyland Lynx is a bus from the British commercial vehicle manufacturer Leyland Motors . The type was built from 1984 to 1992. It was to replace the Leyland National , which had been built since 1972 .

The bus engine is located at the rear, but the radiator is located at the front for better cooling. Various six-cylinder diesel engines from Leyland , Gardner , Cummins and Volvo were available for the bus . Were used Leyland Hydracyclic gearbox or automatic transmission from ZF .

All Lynx were built as a line bus. The body of the bus was mostly made by Leyland itself, only seven Lynx for Ulsterbus or Citybus got a body by Alexander . The bodies of Leyland differ in terms of equipment and seating capacity for the individual operators. The buses for export were usually delivered as a chassis with a motor and fitted with superstructures on site, so one bus for the Singapore Bus Service received a PS superstructure from Alexander , two buses for Sydney received a metro 90 construction by the Pressed Metal Corporation . Depending on the structure, the capacity was around 53 seats. The Mk series, built from 1990 to 1992 II can be distinguished from the previous model by the larger stem of the radiator grille and headlight unit.

A total of over 1000 buses were produced. After the takeover of Leyland Buses by Volvo Buses , the production of the Lynx in Workington was stopped in the early 1990s.