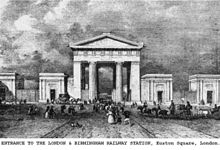 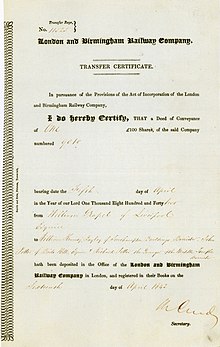 The London and Birmingham Railway (L&BR) was a British railway company that existed from 1833 to 1846 and then became part of the London and North Western Railway . She built the 190 km route between London and Birmingham , which was completed in 1838. The L&BR was one of the world's first long-distance routes and the first railway to run into the center of the British capital. Today it forms the southern section of the West Coast Main Line .

Plans to build a railway line from London to Birmingham first appeared in 1823 when engineer John Rennie founded a company to put this project into practice. Rennie suggested running the route via Oxford and Banbury . A little later, Francis Giles founded a rival company that planned a route via Coventry . As a result, none of the companies could raise enough money for the construction of the route, so they decided to merge in 1830. The newly formed company appointed Robert Stephenson as chief engineer. Stephenson chose the route via Coventry, mainly because he feared flooding from the Thames at Oxford .

Parliament rejected the first bill to build the line, mainly because of opposition from landowners and canal operators. However, in May 1833 the law was passed and construction began in November of the same year. The opening should originally have taken place at the same time as the Grand Junction Railway (GJR), which reached Birmingham from the north. However, due to problems with the construction of the Kilsby Tunnel in Northamptonshire , this deadline could not be met.

On July 20, 1837, the first section between London Euston Station and Boxmoor was opened at Hemel Hampstead . The commissioning of the rest of the line should have taken place on June 28, 1838, the day of Queen Victoria's coronation , but the work was not yet completed. However, the L&BR recognized that the traffic volume would be particularly high that day. She therefore preferred the opening of the Birmingham - Rugby and London - Bletchley sections and set up a stagecoach connection on the middle section. Continuous operation began on September 17, 1838.

The site of the London and Birmingham Railway (1838) at Blisworth , Northamptonshire

Since the locomotives were not yet powerful enough at the beginning, the trains were pulled up on the relatively steep section from London Euston to Camden by means of a stationary steam engine on rotating cables, a device invented by Charles Fox , who was responsible for the construction of this section . The original engine shed in Camden still stands today and forms the central part of The Roundhouse cultural center . The main workshop was in Wolverton .

In 1846 L&BR, GJR and Manchester and Birmingham Railway merged to form the London and North Western Railway . None of the L&BR end stations (both designed by Philip Hardwick ) remained in their original form. Curzon Street Station in Birmingham was closed in 1854 and replaced by New Street Station . Euston Station in London was demolished in 1962 and given way to a new building in 1968.