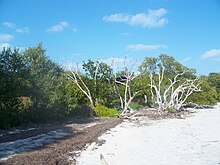 Long Key State Park is a state park in Monroe County in the US state of Florida . The 390 hectare state park is located on the Overseas Highway at Mile Marker 67.5 on Long Key Island, an island in the Florida Keys .

In elaborate actions, the invasive casuarina and portia trees that had shaded the campsite for years were felled and replaced by more than 500 native trees and bushes.

The vegetation of the low-lying parts of the island consists of seagrass meadows and mangroves . The long coastline, the hammocks, the lagoons and the seagrass meadows are habitat for a wide variety of birds, butterflies and land crabs . The island is on the Great Florida Birding Trail , and in addition to the native birds, the island is also a resting place for numerous migratory birds. Ibises , egrets and egrets can often be seen, white-headed doves and rose spoonbills are less common . Horseshoe crabs , starfish , loggerhead turtles and green turtles live in the lagoons and in the shallow sea around the island .

From 1961, the land for the park was acquired until the state park was officially opened on October 1, 1969.

The hurricanes Georges and Irene destroyed the campsite in 1998 and 1999, so that it had to be rebuilt.

The island is supported by the Friends of the Islamorada Area State Parks Association.

The park is open all year round and there is a fee to use it. During the winter season, ranger-led hikes or canoe trips are offered several times a week.

In the west of the park there is a campsite with 60 parking spaces right on the banks of Floridastraße . The island has several beaches and spots for swimming and snorkeling. The island also offers good opportunities for canoeing or kayaking. A canoe trail leads through several inland lagoons. Across the island are two 3 km long paths, of which the Gold Orb Trail , named after a local spider, leads over a boardwalk to a wooden observation tower that offers a panoramic view of the island, while the Layton Trail leads to the shore on Florida Bay leads. For anglers, the island is one of the best places in the Florida Keys to fish for fishbones .