Luigi Borro was illiterate, but got through the agency of the painter Giovanni Demin to Venice, where he learned to read and write. At the end of 1842 he enrolled at the Accademia . In 1844 he was proposed by Federico Zandomeneghi for one of the scholarships that the Austrian Emperor - Veneto belonged to the Austrian Empire until 1866 - had provided for able but poor students. In 1845 he received a three-year scholarship, which was followed by another for a stay in Rome , where he lived until 1852. Returned to Venice and married, he created sculptures in Venice and Treviso to commemorate the deceased, as well as those for cemeteries and portraits. From 1861 his studio was located in the Chiesa di Santa Margherita , which had ceased to be a parish in 1810 and therefore served as a warehouse for tobacco and later for marble from other churches whose parishes had also been dissolved. Borro's students included the Venetians Antonio Dal Zotto (1841–1918) and Carlo Lorenzetti (1858–1945), as well as Antonio Carlini (1853–1933), who came from Treviso .

But Borro's interest in old paintings that had fallen out of fashion, like his overall lack of success, made him forgotten, apart from the monument to Daniele Manin from 1874. Impoverished and embittered, he died in Venice on February 6, 1886. 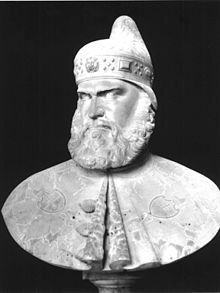 His outstanding works include the Liberazione di un ossesso (Liberation of a possessed) in the Museo d'Arte Moderna di Venezia or the Natale Schiavoni in the same house, which he created in 1856, which is surprisingly lively, almost Goldoni-like because it appears less formalistic, but also being Antonio Catullo in the Museo Civico di Treviso from 1864, a work of sharp-sighted and unprejudiced realism . This also includes his bust of Lazzaro Mocenigo , which he created in 1865. 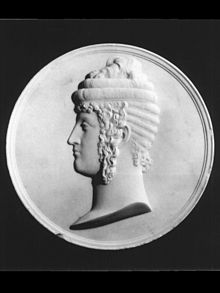 Cassandra Fedele (1465-1558). The work was created between 1864 and 1865 and belonged to the Panteon Veneto in the Palazzo Loredan on Campo Santo Stefano.

Borro was little known as a painter, but some notable portraits survived, such as that of Giovanna Marina Dolcetta from 1864, which is now also in the Museo Civico di Treviso.

In the 20th century, exhibitions and publications by Nino Barbantini (1884–1952) on the history of art in the 19th century reminded of the work of Luigi Borros.

In Treviso, Via L. Borro commemorates the artist.