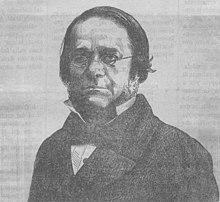 Daniele Manin (born May 13, 1804 in Venice , † September 22, 1857 in Paris ) was instrumental in the revolution of 1848 in Venice, where under his leadership the republic, independent from Austria, Repubblica di San Marco was proclaimed. Referring to the former Republic of Venice - which existed until 1797 - Manin is also given the nickname "The Last Doge " by some authors .

The revolution in Venice was related to the liberal and radical democratic uprisings for an independent Italy and was part of the March revolutions against the ruling royal houses and the restoration-political order since the Congress of Vienna in 1815.

Manin was the grandson of a lawyer of Jewish origin. His grandparents, Samuele Medina di Verona and Allegra Moravia Medina, were converted Jews who, with their baptism in 1759, took the name of the godfather Bishop Lodovico Manin, a brother of the last Doge of Venice , Ludovico Manin (1789 to 1797), as usual . Daniele Manin studied law at the University of Padua . He received his doctorate there at the age of 17 and established himself as a lawyer in his hometown.

Plaque at the house where Daniele Manin was born in Venice

Daniele Manin was very respected, spoke Italian, Latin, Greek, Hebrew, French and German in addition to Venexian. He worked on the preparation of the railway connection to Venice ( Ferrovia ferdinandea ), worked zealously for the political education of his people, supported the leader of the national movement, Giuseppe Mazzini , publicly criticized the Austrian government that ruled over large parts of northern Italy and founded the Società Nazionale Italiana with. On December 21, 1847, he submitted a petition to the General Congregation of Lombardy demanding that the Austrian government grant independence to the Kingdom of Lombardy-Veneto. He was therefore arrested on January 18, 1848, but released on March 17 after violent protests in Venice and the news of the uprising in Milan . Daniele Manin then gave a speech in which he u. a. said that sometimes armed insurrection is not just a right but becomes "a duty" in certain circumstances. He urged to free himself from Austrian rule. His stance was controversial and it is not entirely clear whether he really wanted an armed uprising. Daniele Manin declined to join the advisory committee set up by the Podestà Giovanni Correr to help address "the unpredictability of the moment". He withdrew with a sulk and was taken out of bed on the morning of March 22, 1848 with the news of the arsenal workers' uprising. He was only added when the arsenal was already occupied by Venetian patriots. Military governor Field Marshal Count Sigismund Ferdinand von Zichy capitulated on March 22, 1848 at 6:00 p.m. and withdrew with the troops. The following day the republic was proclaimed and Daniele Manin appointed Prime Minister and Minister of Foreign Affairs. After a plebiscite in May 1848 in Lombardy and Veneto in favor of annexation to the Kingdom of Sardinia-Piedmont , Daniele Manin resigned on July 3, 1848 in favor of Jacopo Castelli on the grounds that he could not serve as a subject to a king. On July 4, 1848, the decision was made to join the Kingdom of Sardinia-Piedmont. On August 11, 1848 Daniele Manin was given "unlimited powers" by the democratically elected Venetian city parliament in view of the siege of Venice by Austrian troops. He maintained internal order, inspired the residents to resist the Austrian troops and held the city against the Austrians until August 1849. On August 23, the city was conquered and the city-republic that had existed for a year and a half was destroyed.

Daniele Manin was expelled along with 39 other leaders of the revolution on August 24th. In exile in Paris he worked as an Italian language teacher and journalist. There he increasingly gave up his radical democratic stance and demanded in magazine articles a moderation of the national movement and the connection of the northern Italian territories to the Kingdom of Sardinia-Piedmont. Shortly before his death, on August 1, 1857, he founded the Italian National Association , in which the numerous fragmented currents of the Italian national movement came together.

Manin died in France on September 22, 1857. After the annexation of Veneto to the Kingdom of Italy , his remains were transferred to Venice in 1868 and solemnly buried on the north facade of St. Mark's Basilica . On March 22, 1875, his statue was unveiled on the so-called Campo Manin opposite his former home. A statue of Manin was erected in Turin as early as 1861.