The flag of the Republic of San Marco , the Italian Tricolore with the Venetian landmark, the St. Mark's lion , union

The Repubblica di San Marco (translated into German: Republic of Saint Mark ) was from March 23, 1848 to August 22, 1849 a state structure in the northern Italian Veneto with the center of the lagoon city of Venice , which existed for about one and a half years . She was in the course of almost all Central Europe detected revolutionary upheavals of 1848 created - as the February revolution in France and the March revolution in the states of the German Confederation .

In northern Italy , too, there were independence movements against the rule of Austria as early as January 1848, which intensified in March, especially in Milan and Venice. A major goal in the Italian regions and provinces was the national unification of the various principalities to form an all-Italian nation-state (cf. Risorgimento ).

Daniele Manin, a lawyer, and Niccolò Tommaseo , a writer, presented the government with a petition on December 21, 1847, calling for reforms to the constitution. They were then arrested on January 18th. 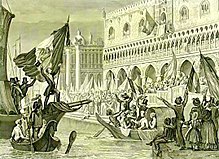 Proclamation of the Repubblica di San Marco in the Venice lagoon in front of the Doge's Palace on March 23, 1848 (lithograph by Sanesi, approx. 1850)

While the independence of Lombardy from Austria and its annexation to the Kingdom of Sardinia-Piedmont was declared in Milan and the revolution began in Vienna on March 13th , Venice called after a riot that began on March 22nd led by Manin. On March 23, 1848, Venice became an independent republic from prison . The Austrian general Ferdinand Zichy (1783–1862) had to leave the city. On March 26th, the Piedmontese occupied Milan. Their King Carlo Alberto now received support from the Papal States , the Kingdom of the Two Sicilies and the Grand Duchy of Tuscany ; there were also volunteers from all over Italy. But already in April Pope Pius IX. Sicily reacted similarly, so that Piedmont, despite the victory of Goito on May 30th and the expulsion of the Austrians to Mantua , soon fell on the defensive.

Venice remained neutral in the war between Austria and Sardinia-Piedmont and was thus able to maintain its independence for almost a year and a half. On July 25, 1848, the Piedmontese, whom Venice officially joined on July 5, suffered a heavy defeat at Custozza , and then withdrew their fleet from Venice. Guglielmo Pepe , who, coming from Naples , was to ally himself with the Piedmontese on the orders of the Kingdom of the Two Sicilies , came too late, but refused to return with his 2,000 volunteers and joined Venice. Giuseppe Garibaldi , who later also wanted to come to the aid of Venice with his troops, did not succeed in getting there.

In May 1848, a plebiscite was held in Lombardy and Veneto in favor of the Anschluss (the Italian word for it - annessione - but also means annexation ) to the Kingdom of Sardinia-Piedmont, but only gained practical and political importance around twenty years later . Daniele Manin then resigned in favor of Jacopo Castelli on July 3 on the grounds that he could not serve as a subject to a king. On July 4, 1848, a resolution was passed to join the Kingdom of Sardinia-Piedmont. However, on August 11, Daniele Manin was made dictator in view of the external threat . By the end of the year the Austrian troops had conquered the entire Veneto , Milan had already been occupied in August.

The renewed uprising of the Piedmontese in March 1849 gave the Venetian Republic once more air. Manin was elected President of the Republic on March 7th. But on March 23, the Piedmontese were defeated at Novara and the king abdicated in favor of his son Victor Emmanuel II .

Recapture by the Austrians 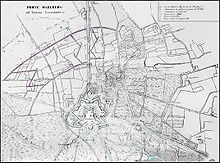 Marghera Fortress 1848 (floor plan and map of the area)

After the victory of the Austrians over Sardinia-Piedmont and the peace treaty of Milan on August 6, 1849, the city republic of Venice was conquered by the Austrian military on August 23, 1849 as the last bastion of the northern Italian revolutionaries and republicans .

On May 4, 1849, the Austrians under General Julius von Haynau attacked the Marghera fortress , which was defended by 2,500 men under the command of Colonel Girolamo Ulloa from Naples . He had to vacate the fort on the 26th. The revolutionary troops confronted the Austrians on the Ponte della Libertà , which connected the mainland with the historic core of Venice. A request for surrender by General Radetzky was rejected. Venice was then shelled by Austrian artillery for 24 days after actions to bomb the city with the help of balloon bombs had proven to be a failure.

Monument in memory of Daniele Manin, the leading protagonist of the Venetian Revolution (bronze statue from 1875 in the center of Campo Manin in Venice)

On August 22, 1849, the city, which was additionally affected by the cholera , had to surrender, and on August 27, the troops marched in. Manin and 39 of his supporters went into exile .

Subsequent development up to the connection of Venice to Italy

Afterwards Venice remained under Austrian rule until 1866 and after its defeat by Prussia in the German War it went to the newly founded Kingdom of Italy in 1861 .

The city ​​regained its status as a free port on July 20, 1851, and the state of siege was lifted on May 1, 1854. As recently as 1859, Vienna had refused to sell the Veneto to Italy because it had been granted the Veneto in the Peace of Villafranca . Only after the Battle of Königgrätz in 1866 did Austria give Veneto to Emperor Napoleon III on July 4, 1866 . from. After the Austrians had evacuated the city on October 8 and Italy had enforced a plebiscite, he left it to Italy. The French general Le Boeuf complained to Napoleon III. About the course of the plebiscite, for example that those who voted yes and those who voted no had to name their names and received voting cards of different colors, but he saw no need for action. The result was irrelevant, as appropriate agreements had been made shortly beforehand. On October 27, the Supreme Court announced the result: 641,758 Veneto residents had voted for the connection, 69 against, although the majority of the population, especially in rural areas, did not vote.