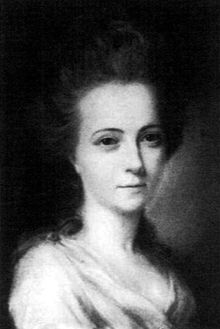 The Mejer family belonged to the so-called pretty families in the 18th and 19th centuries .

Luise Mejer was the daughter of the War Secretary Franz Otto Mejer and his wife Sophie Katharine geb. Emperor. Her mother died giving birth to her tenth child when Luise was ten years old.

In her mid-twenties she began a sad career as a nurse for her relatives. Within a few years she cared for her friend Julie von Knigge, then her father, her older brother and finally his wife until she died. After these experiences, she found herself in very poor health. Her only surviving relatives at this point were a rich but unsympathetic uncle and her younger brother George Mejer , with whom she shared a small apartment in Hanover.

In 1776, at an evening party, she met the staff secretary and intellectual Heinrich Christian Boie , with whom a close friendship quickly developed. However, Luise refused the marriage proposal that she received from him two years later out of consideration for her poor health and poor financial position. Nevertheless, the two remained close friends, and a lively correspondence developed when Boie became bailiff in Meldorf in Holstein in 1781 . In their letters, the two of them report in great detail about their respective living conditions, which Luise has changed several times over the years.

After Boie's departure and the death of her friend Lotte Rehberg , she moved to her friend Luise von Pestel in Celle, where she entertained her ailing husband and raised her little foster son Georg. She visited her old friends in Hanover several times, then traveled to Osterode for a long spa treatment , where her brother was now employed. She visited Göttingen and finally traveled to Tremsbüttel via Hamburg to visit the von Stolberg family. Countess Luise von Stolberg tried by all means to keep Luise with her as a reader and secretary, which she was very reluctant to do. Refusing the offer seemed impossible without a social uproar. A ray of hope was Boie's visit to Tremsbüttel, which was closely connected with the Counts of Stolberg. On the spur of the moment, the couple decided to get married after all. After a year of waiting, during which Boie enlarged the house in Meldorf and Luise stayed partly in Celle, partly in Osterode, the wedding took place in 1785. A year later Luise died giving birth to her first child. She was 39 years old.

Luise Mejer has no descendants and - apart from her letters - she did not create any literary or other artistic works, nor did she intervene in the course of history to any particular extent. Nevertheless, through the detailed testimony of her letters, she represents a person of historical interest, since she provides an example of the different roles that one and the same bourgeois woman without financial reserves could assume in the late 18th century: