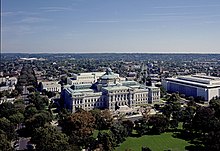 The MARC format is since the 1960s from the Library of Congress in Washington, DC developed

MARC ( MA chine- R eadable C ataloging) is a bibliographic data format . It was developed in the USA in 1966 . Numerous different versions followed over the years, of which the MARC 21 version is mainly used by libraries worldwide. MARC 21 is a general format that can be read and processed by a wide variety of applications. The main purpose is to transfer bibliographic data between libraries.

MARC provides the protocol by which computers can exchange bibliographic information with one another. Its data elements form the basis for most of the library catalogs used today . UNIMARC and MARC 21 seem to be particularly important at the moment. The common authority file (GND) works, for example, with the exchange format MARC-21-Authority.

There are numerous versions of the MARC format today. Many of them have been developed by major libraries for their use and are limited geographically in their application, such as in Norway in Oslo developed version NORMARC in use. The internationally most important version by far is MARC 21.

A department of the Library of Congress, the Network Development and MARC Standards Office, is responsible for developing the MARC format . Changes to the MARC 21 format are proposed by the MARC Steering Group . This consists of one representative each from the Library of Congress, the Canadian National Library , the British Library and the German National Library . The MARC Advisory Committee , which was formed in 2013 from 22 people from various institutions, has an advisory role to the working group . The Library of Congress operates an information forum for current information, such as changes. Format changes are usually published every six months as a MARC 21 update and can be used without restrictions for 60 days from the date of publication. 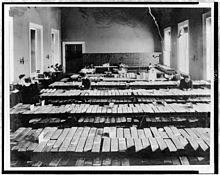 Before the automation and development of MARC, the Library of Congress card catalog was the storage medium for the library's title records

After the Library of Congress (LC) began researching ways of using automation technology in internal workflows as early as the late 1950s, a study on the subject funded by the Council on Library Resources (CLR) was published in 1963 . As suggested in the study, a working group was set up with the task of designing and ultimately implementing the future automation of cataloging and research. A study also funded by the CLR and belonging to the prehistory of MARC appeared in 1965. It examined the possibility of converting the data contained on the catalog cards of the LC into a form that can be read by machines. Its intended purpose was primarily the generation of bibliographic products by computers. The results of the study were discussed at a conference at the LC in January 1965, attended by librarians, representatives of the state and the private sector, research scientists and institutions. The parties involved agreed that the new machine-readable recordings should be developed as a cross-library standard at the LC and should contain additional data beyond the data of the previous LC catalog cards. With a view to the upcoming requirements, LC employees analyzed the data to be cataloged and published a corresponding report in June 1965. After another conference in December 1965, the CLR approved the LC funds to carry out a corresponding pilot project. The aim of the project was to test the feasibility and the usefulness of the distribution of machine-readable catalog data by the LC to other libraries. The name of the project was MARC, an acronym for machine-readable cataloging .

At the beginning of the project, the LC searched for participating libraries and finally selected 16 suitable libraries. In addition, processes and programs were developed to convert , maintain and distribute the MARC data . Programs were created for the participating libraries that made it possible to use the data provided. In February 1966 a meeting of the participants took place at the LC, at which the LC informed about the MARC project and its planned course. It was decided to limit the title recordings to book material. The schedule provided for the project version of the MARC format (later referred to as version MARC I ) to be completed within three months and the necessary processes and programs to be developed within eight months. In fact, the first data distribution took place in October 1966, when a test magnetic tape was sent out. The weekly data distribution began in November. In the following months, the library programs were freed from errors or rewritten in close cooperation over the telephone, and the production processes for correct title recordings were improved. The project was originally too short and only scheduled until June 1967. In order to produce satisfactory results for the future, it had to be extended until June 1968. The final report was published that year. At the end of the project, the LC had delivered around 50,000 MARC I title recordings of English-language books to the participating libraries.

Due to the success of the MARC pilot project, the planning and implementation of a fully functional production system started before its end, which should enable the permanent distribution of the catalog data to the 20 participating libraries. Already in the course of the pilot project it was intended to be able to replace the test format MARC I with a productive successor version (later realized as MARC II ) with the help of the expected experience . The new version MARC II was influenced not only by the collected evaluations of the participating libraries, but also by the decision of the British National Bibliography (BNB) to start its own sister project under the name UK / MARC Pilot Project . Since other libraries also expressed interest, the LC planned to create not only a format for the distribution of the LC's recordings to libraries, but a general, international format for the exchange of bibliographic information between cataloging libraries. Despite the initial restriction to books, the basic idea behind the implementation was to be able to record title data of all media forms (such as books, magazines, maps, music, articles, etc.) with MARC, on storage media that, in contrast to the previous catalog cards of machines can be read and processed. The three components of a MARC data set were firstly the empty structure, secondly the tags, indicators and subfields that describe the respective recorded data and make it identifiable, and thirdly the data itself (such as author, title, etc.). The process of defining all the elements necessary to describe books took place over a long period of time with the participation of numerous cataloging librarians. In addition to the MARC format, a character coding for the title recordings was also specified. In December 1967 a conference took place at the LC, in which the participants made groundbreaking decisions about the progress of the automated processing of bibliographic data and especially the MARC format.

The MARC Distribution Service from 1969

From June 1968 to March 1969, MARC was further developed and tested. Before the start of the paid MARC Distribution Service in March 1969, the LC published an introduction to MARC and a test magnetic tape with MARC catalogs, both of which were intended for libraries interested in the Distribution Service. Operations began in March 1969 with the English-language monographs recorded at the LC. Every week around 1000 new recordings were sent on magnetic tape. The first edition of the MARC Manuals appeared in the same year . In 1970 MARC formats for series titles and maps were published, in 1971 for films and 1973 for manuscripts. In 1975 the database already contained around 605,000 titles, including films, series titles, foreign-language literature and more. The MARC catalogs could be bought from libraries.