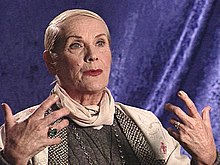 Maila Nurmi in the documentary SCHLOCK! The Secret History of American Movies , 2001

Nurmi was Paavo Nurmi's niece . Her family emigrated from Finland early and moved to Oregon when Maila was two years old. At 17, she decided to become an actress and moved to Los Angeles . At first, dark-haired Nurmi and the still unknown Norma Jeane Baker (later Marilyn Monroe ) kept themselves afloat with cheap jobs as a photo model, until the first smaller roles emerged, mostly for television productions. Producer Michael Todd made her breakthrough into the acting business with a casting for the play Katherina the Great in New York City . Another production of Todd had Maila appear in 1953 as a seductively dancing vampire for a television production (a midnight horror show); thus the foundation stone for the beginning metamorphosis of Maila to Vampira was laid. The show was discontinued after one episode, but the film director Howard Hawks who happened to be present was so impressed by Nurmi that he got her a permanent contract in Hollywood . First, Maila Nurmi, with her expressive face, was showered with roses as the new " Lauren Bacall ", but they soon faded when a Hawks film project (Dreadful Hollow based on William Faulkner ), in the lead role of which she was intended, failed.

Sobering, Maila Nurmi had to keep her head above water with part-time jobs as a dancer and appear in cheap film productions. The tide turned in her favor when she briefly took on the role of Morticia Addams (from the cartoon series Addams Family ) at the side of her husband, the television producer Dean Reisner , in 1954 . With her outfit consisting of pale makeup with made-up bleeding wounds in the neckline, a black wig, fishnet stockings and a tight-fitting black and tattered dress, she achieved another “enchanting” success. The television producer Hunt Stromberg Jr. became aware of the woman with the morbid aura and initially engaged Nurmi for a new program concept for the American channel 7 KABC, an offshoot of the ( ABC ). Maila Nurmi, in her role as the undead art creature Vampira (her husband invented the name), was to lead the television viewers at ABC through a selection of horror films from now on at midnight . The “Lady of Horrors” soon flirted with her pseudonym, the undead bloodsucker Vampira, both publicly and privately, and provided a template for numerous horror film imitations and became the epitome of the “Midnight Horror Show”. At the end of her show, she mostly wished her audience “good night and bad dreams, darlings!” And disappeared into the artificial fog.

Maila / Vampira appeared as a cover girl "with HEX-SEX -appeal" in several publications such as Newsweek or Life and was nominated in 1954 for the Television Arts and Sciences Award as the most unusual female actress. The number of her mostly male admirers (including Marlon Brando and James Dean ) grew. In an interview she once said: "Jimmy (James Dean) and I were drawn to each other as extreme characters like magnets." After a brief love affair with Dean, the two remained on friendly terms. After Dean's accidental death in 1955, dark clouds began to rise again over Vampira's career: their midnight horror show, popular with the public, was temporarily overturned by ABC , and her name was dragged through the cocoa by the American tabloids as "Jimmy Dean's Banshee or Whore". In addition, she was sexually attacked or threatened by fanatical James Dean fans. Maila Nurmi withdrew from the public for the time being.

The actress played in Plan 9 from the universe of B-movie director Ed Wood , who would only become a cult film years later, and several other low-budget productions and gradually withdrew from the active film business from the 1960s .

In the 1980s she unsuccessfully sued the character Elvira with allegations of plagiarism.

Nurmi died of natural causes on January 10, 2008 at her Hollywood home at the age of 86. She was buried in the Griffith Lawn Section of Hollywood Forever Cemetery.