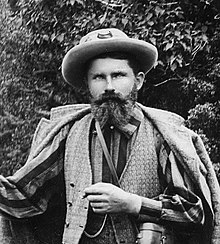 Matthias Zurbriggen was born in Saas-Fee, but emigrated to Macugnaga , Italy, with his family as a child . According to the story, Matthias Zurbriggen was still so small at the time that he was carried across the Monte Moro Pass in a stretcher on his mother's back . From then on the family lived in the Italian Walser village of Macugnaga. At the age of thirteen he left Macugnaga and worked as a laborer in various countries before returning to his Walser homeland. He acquired his mountaineering skills while building the Marinelli hut on the east face of Monte Rosa . There he worked longer as a mountain guide until he was hired by William Martin Conway in 1892 has been discovered.

Together they explored glaciers and peaks in the Karakorum for a whole year and set the record for that time at 6890 meters on a secondary peak of the Baltoro Kangri . After that, Zurbriggen traveled alone in India and Australia . On January 14, 1897 he made the first ascent of the 6958 m high Aconcagua in the Andes in Argentina as an expedition leader. A short time later he was at the tupungato with Stuart Vines .

Zurbriggen later traveled to the Tianshan and undertook another Himalayan expedition in 1902 . In 1906 he was back on the Monte Rosa, after which his activities as a mountaineer ended. He fell socially and became a vagrant , on June 21, 1917 he was found hanged in Geneva.