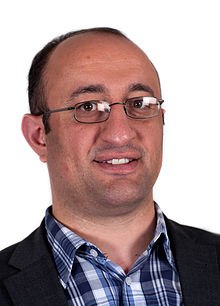 Mehmet Yıldız (born October 2, 1977 in Kayseri , Turkey ) is a German politician ( Die Linke ) of Turkish-Kurdish origin. He has been a member of the Hamburg Parliament since 2008 .

Yıldız was born in 1977 to a Kurdish working class family in Turkey and attended elementary school there from 1984 to 1988 and secondary school until 1990. At the age of twelve he moved to Germany. In 1993 he graduated from a comprehensive school. Before that he attended the multinational preparatory class in 1991/92. From August 1993 to January 1997 he completed an apprenticeship as an electrician . Until March 2008 he worked as an order picker .

Yildiz, who is also a member of IG Bau, is committed to the Democratic Workers' Association ( DIDF ), the majority of which are of Turkish and Kurdish origin.

In the 2008 general election, he moved into parliament as a non-party candidate for the DIDF from position 6 on the state list of the party Die Linke. In April 2009 he announced his entry into Die Linke. In the 2011 mayor election , he won a direct seat in the constituency of Billstedt-Wilhelmsburg-Finkenwerder . He was a specialist spokesman for migration, sport, children, youth and family. For his parliamentary group, he sat in the 20th legislative period in the family, children and youth committee, in the sports committee and in the “Yağmur” committee of inquiry . He was also a deputy member of the Interior Committee and was previously chairman of his parliamentary group in the special committee on the death of the girl Chantal .

In the 2015 general election , he won another direct mandate in constituency 2. In the 21st electoral term, he is the child and sport policy spokesman for his parliamentary group. On February 23, 2020, Yildiz again succeeded in entering the Hamburg parliament .

In an interview with Avrupa Postası magazine on March 18, 2020, he expressed the conspiracy theory that the coronavirus was "manufactured in a laboratory" by the USA to "stop China and intensify the class struggle from above". The Hamburg parliamentary group leadership distanced itself from the statements.