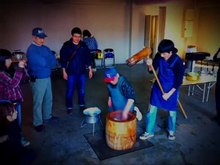 In the usual preparation in Japan , the sticky rice ( mochigome ) used is first steamed. Traditionally, it is then beaten in wooden tub mortars ( jap. 臼 , usu ) with large wooden pestles ( jap. 杵 , kine ), with a helper turning the lump of rice after each blow. Today, however, this traditional method of preparation is almost only shown at folk festivals or at public performances by sumo wrestlers . Machines usually take on this step due to the enormous amount of force that is required.

Mochi can be freshly prepared as a soft cake or eaten in a dried form. They are often roasted and served with sugar, soy sauce or nori . At New Year they are eaten as a side dish to Zōni , a special New Year soup.

Because of their stickiness and the tradition of eating as many mochis as possible to celebrate the New Year, deaths from asphyxiation occur every year, reported by Japanese newspapers in the form of "New Year's Death Statistics" and frequently also covered by Western mass media .