from Wikipedia, the free encyclopedia
fd2

The Mount Si ( / saɪ / ) is a mountain in the US state of Washington . It lies on the western edge of the Cascade Range just above the coastal plain on Puget Sound and towers over the neighboring town of North Bend . The mountain was named after the pioneer Josiah "Uncle Si" Merritt. He became known in the television series Twin Peaks , which was filmed in North Bend.

Just a 45-minute drive from Seattle , the mountain is the preferred outdoor destination for residents of Puget Sound. Between 80,000 and 100,000 hikers come to the mountain every year. The land belongs to Washington State and is designated as a Natural Resources Conservation Area . 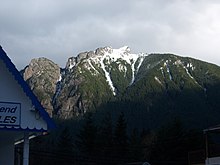 Mount Si is a remnant of an oceanic shield volcano. The rock has undergone extensive metamorphosis.

Mount Si is prominently described in a Prometheus story of Snoqualmie . According to this legend, he is the dead body of Snoqualm, the moon god . Snoqualm had ordered that a rope from the bark of the giant tree of life should be stretched between earth and sky. But the fox and blue jay climbed up the rope and stole the sun from Snoqualm. Snoqualm followed them down the rope, but it broke and he fell to his death. The fox then released the sun and brought fire to the people. A face is visible near the summit that could belong to Snoqualm.

Panorama from the Haystack